A Magical Negro Is Threatening Trump 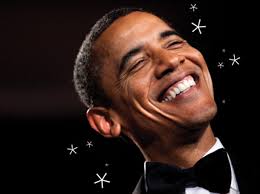 Apparently, Barack Obama is still running the US government.

That's the newest conspiracy theory, exploded into full public view last Saturday by a series of Trump tweets in which he alleged that Obama had tapped his phones.

Not just tapped his phones. Obama is also apparently directing his corps of loyal federal employees to leak every damaging piece of information they can find on Trump. (Gee, couldn't one of you good moles at least leak Trump's tax returns?)

The conspiracy theory is fed constantly by Breitbart News, Fox News, and Infowars, the propaganda triumvirate dedicated to feeding the fears of the low-information voter. The fount flows first through Steve Bannon, who's ladled supposed "deep state" skullduggery into Trump's victim fantasies.

Trump put the Obama wiretapping conspiracy out there, and the propaganda triumvirate -- seconded by conservative talk radio -- has rushed to supply "facts" to dress the window. “Donald Trump is the victim. His campaign is the victim. These are police state tactics!" said Mark Levin, the originator of the wiretapping theory, on an obliging Fox News.

The fact that Obama has kept a low profile since the inauguration only fuels the conspiracy-minded. Obama must be plotting in secret -- since we can't see him -- sending directives to his agents in the FBI, the CIA, the NSA to leak information, assembling an army of Soros-funded Marxist-Leninist insurgents to show up at Republican town halls, chuckling over the transcripts of secretly tape-recorded phone calls made by the Pussy-Grabber-in-Chief.

How the former president has grown since he left office!