How the Little Mind Thinks 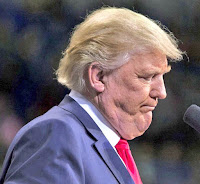 On Thursday evening, March 2, talk radio yakker Mark Levin floated a conspiracy theory that President Obama, in his last weeks in office, implemented a program to thwart and subvert incoming President Trump, including but not limited to a wiretap program based on a Foreign Intelligence Surveillance Court (FISA) request.

By Friday, March 3, Breitbart News, which has excellent pipelines into the White House, amplified Levin's theory with added enhancements meant to raise the small hairs on every conspiracy-minded right-winger out there.

By Friday evening, at his gilded Mar-y-Lago cage for the weekend, President Trump was telling resort guests all about Obama's orders to have him wiretapped, and then early Saturday morning he began floating the conspiracy in a series of unhinged tweets to his Twitter followers.

It was another one of those outrageous shiny objects that Trump likes to wave when things are otherwise going badly, which they have been. His followers will believe every word, not putting two-and-two together, but the rest of us are free to see just exactly how the small mind works.

"A senior White House official" -- feel free to guess who -- told a couple of New York Times reporters that Donald F. McGahn II, the president’s chief counsel, was working to secure access to "what Mr. McGahn believed to be an order issued by the Foreign Intelligence Surveillance Court authorizing some form of surveillance related to Mr. Trump and his associates."

Not much later -- and this gets good! -- and "after the White House received heavy criticism for the suggestion that Mr. McGahn would breach Justice Department independence," a different administration official  -- again, feel free to guess who -- said that the earlier statements about McGahn's efforts had been "overstated." The official said the counsel’s office does not know whether an investigation exists.

According to the reporting of Schear & Schmidt, several of Mr. Trump’s advisers "were stunned by the president’s morning Twitter outburst. Those advisers said they were uncertain about what specifically Mr. Trump was referring to...."

Ben Rhodes, a former top national security aide to Mr. Obama, said in a Twitter message directed at Mr. Trump on Saturday that “no president can order a wiretap” and added, “Those restrictions were put in place to protect citizens from people like you.” For if there's one thing we've learned about Trump, it's that he projects his own dark instincts onto other people.

And then there's this bit of intel:

In the fall, the F.B.I. examined computer data showing an odd stream of activity between a Trump Organization server and Alfa Bank, one of Russia’s biggest banks, whose owners have longstanding links to Mr. Putin. While some F.B.I. officials initially believed that the computer activity indicated an encrypted channel between Moscow and New York, the bureau ultimately moved away from that view. The activity remains unexplained.

Republican Senator Ben Sasse of Nebraska issued a statement following Trump's Twitter tirade: “The president today made some very serious allegations, and the informed citizens that a republic requires deserve more information .... we are in the midst of a civilization-warping crisis of public trust.”