Just Another Day in Trumpland 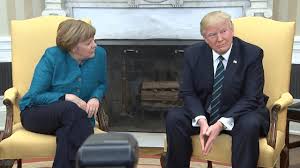 The leader of the Free World met yesterday in the Oval Office with the militaristic white nationalist leader of a fading empire, and the jerk refused to shake her hand.

The white nationalist had been harshly critical of Chancellor Angela Merkel last fall for allowing refugees into Germany. Refugees.

For her part, Merkel said, “I’ve always said it’s much, much better to talk to one another, and not about one another.” Which perhaps prompted the white nationalist to attempt a joke that both he and Merkel had been wiretapped by Barack Obama. Joke fell flat.

As Merkel and the white nationalist sat together in front of TV cameras in the Oval Office, the press pool began asking for the historic handshake, a request that Trump ignored. When Merkel turned to him and asked, "Do you want to have a handshake?" Trump wouldn't even look at her. That's how an asshole behaves.

Trump has now insulted, demeaned, or belittled many of the world leaders he's met with. And that's how a white nationalist behaves.

Posted by J.W. Williamson at 3/18/2017 09:06:00 AM
Email ThisBlogThis!Share to TwitterShare to FacebookShare to Pinterest
Labels: Angela Merkel, Donald Trump

Silly for anyone to ask him for a handshake, no matter how it's done in international diplomacy....everyone knows he's a germaphobe. The rest of us, of course, simply wash our hands after being out in public, shaking hands. What a snowflake!

Shaking hands is a bad tradition.

Yes, there are diseases that are transmitted, and most people's sanitary habits are questionable.

But the main reason is that whenever someone sticks his hand out to me I get the feeling they either want to cheat me or stab me in the back.

It's a nasty habit best forgotten.

And Trump is right, Merkel is killing the German culture by letting the muslim invaders into her country.

I've been to Germany several times, and the muslims to not assimilate, they COLONIZE, in their own neighborhoods. They are there to suck off of Germany's overly generous welfare system. If they are refugees why did they leave their wife and kids in a war zone?

Germany for the Germans!

PS Every time I've come back from Germany I feel like I should wear gloves everywhere outside of my home because of the filth here.

I regret that your experience of Muslim's in Germany has been so limited. I am an American living in Germany and interact with many. Whether they are mechanics working on my car, restaurant owners offering their cuisine, neighbors who join me at the symphony or yes, the refugees warmly welcomed into my town, I never felt the need to wash my hands after being with them. Indeed, I suggest that I would immediately wash my hands and fumigate the area after meeting you and your ilk.

Don't mind Wolf, John. He proudly believes that Rhodesia is the model that our government should follow.

Mr Sears, how odd, I didn't mention anything about my interactions with the Muslims in Germany, only that they do not assimilate, and never wrote that THEY were the reason I felt the need to wear gloves when returning to the US.

I have seen the Muslim neighborhoods in Cologne, and Frankfurt and other cities in Europe, and as a whole, they do not assimilate into German culture, or other western cultures. I don't have the pleasure of living in Germany as you do so yes, my contact with them is limited.

No Mr Sears, my desire to wear gloves when I return from Germany is because of my fellow Americans. The trash overflowing our ditches by winter's end. The disgusting state of public restrooms. The dirty streets. The homes with trash piled in the yards. When returning stateside the difference is striking.

Enjoy your stay in Germany Mr Sears, I am sure we will never meet so don't worry about washing your hands and fumigating.

By the way, isn't that what democrats used to say about black people?

It is true Wolf Head that Democrats are guilty of many sorrowful actions pre Civil Rights. A burden we bare and try and to correct. Too often our attempts to correct the deeds of the past fall far too short. Many of us recognize these shortcomings and endeavor to make life in the United States fair and equitable for everyone as our forefathers envisioned.

You, and your band of deplorables have doubled down on racism, prejudice, and bigotry and shamelessly seek to make America white again. Your hate and fear consumes you. Your ideology cannot end too soon.

As you are a scrupulous hand-washer, you might consider that many restaurant workers are immigrants or the descendants of recent immigrants.

Believe it or not, it was NC's esteemed Senator Tillis who stated that restaurant workers need not be required to wash their hands. Enjoy your meals with that thought in mind and remember who some of the politically active restaurant chains are and who support Tillis and his ilk: Think Red-nation food: White Castle, Outback Steakhouse, Applebee's, IHOP, Dairy Queen, Wendy's, and Chick-fil-A.

Very good job of supporting my position about the sad state of hygene and cleanliness in America.