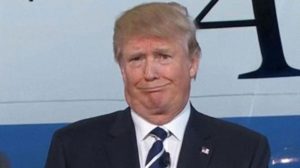 Trump promised to remember "the forgotten men and women."

He vowed to "drain the swamp."

Trump's closing campaign ad prior to the election blasted "the global power elite" and singled out Goldman Sachs as a pillar of the corrupt establishment ... which, Trump claimed, was rigging the election against him.

Trump's inaugural is shaping up to set a new standard for "pay-to-play" politics:

⭑ Those giving $1 million or more toward the inaugural party weekend will get perks including an “intimate dinner” with Vice President-elect Mike Pence and his wife and a candlelight dinner with an appearance by Trump, Pence, and their wives.

⭑ Those who can only afford $250,000 get an “intimate policy discussion and dinner with select Cabinet officials.”

✤ Former Goldman Sachs partner (and Hollywood executive) Steven Mnuchin has been named as Trump's treasury secretary. (Mnuchin is worth only about $40 million.)

✤ Trump's reportedly in talks to hire Goldman Sach’s No. 2 executive, Gary Cohn, to be his budget director.

Yep, better if he appointed a bunch of pathetic leftist losers who never did anything in their miserable lives other than shove their noses up some bureaucrats ass for government largess.

Wonder how much more the Clintons would have charged for a candlelight dinner with policy discussions? I guess we could just look up the Clinton Foundation records and find out.

Wolf....The good news is that they haven't learned anything and will continue to alienate the middle class Americans.
Just be thankful that Pelosi is back as minority leader and most of middle America will continue to reject California liberalism!