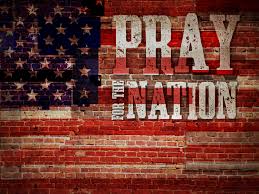 So Trump's inauguration planners have announced that they'll have a half-dozen religious leaders speaking/praying at the swearing in, considerably more of those types than either Ronald Reagan or George W. Bush featured at their inaugurations, because either (a) the Donald -- and the rest of us schnooks too, of course -- need extra lift this year or (b) the Donald knows carnivals and intends to give the masses what he thinks they want. Crackerjacks and cotton candy.

Among the clerics will be Franklin Graham because of course. Graham, you'll recall, came down from The Mount soon after the election and admitted that Vladimir Putin God had directly intervened to push Donald Trump into the White House.

(Still haven't reconciled ancient theology with the choice of a thrice-married, racist, misogynist sexual predator with a trophy wife, who brags about getting away with sexual assault, who cheated his workers, is notoriously stingy with charity, and who declared serial bankruptcy to get out of paying his bills. Who also bears false witness, constantly.)

Praise the Lord and fuggetaboutit!

Posted by J.W. Williamson at 12/30/2016 09:47:00 AM
Email ThisBlogThis!Share to TwitterShare to FacebookShare to Pinterest
Labels: Donald Trump, Franklin Graham, religion and politics

Good Lord! You're so right about his attitude toward charity. Likes to brag about doing it but has done it almost not at all. Read David Fahrenthold: https://www.washingtonpost.com/lifestyle/magazine/david-fahrenthold-tells-the-behind-the-scenes-story-of-his-year-covering-trump/2016/12/27/299047c4-b510-11e6-b8df-600bd9d38a02_story.html?utm_term=.3226d8164b96&wpisrc=nl_most&wpmm=1

Suzannah...you sound like one of those typical liberals whose idea of charity is to donate other people's money.

Taxing citizens is not charity. It is income redistribution. Why don't you donate more of your own money instead of someone elses?

Try to stay up Anon. The article I posted was about Trump's bragging that he had given so very much to charity when that brag was just a plain lie. Nowhere -- NO WHERE -- did I say a word about "taxing citizens." You've got a one-track mind.