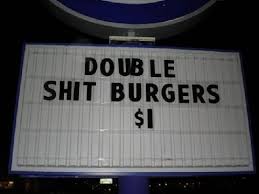 You can't believe anything he says. He's a liar. He's a snake-oil salesman. He exaggerates and then claims he never said any of it.

Last night in Michigan, when another of his idol-worshipping crowds began chanting "Lock her up!" Trump responded, “That plays great before the election — now we don’t care, right?”

Can't wait for him to cave to Paul Ryan on that great promise of his to protect Social Security and Medicare. A new study at Pennsylvania State University has just revealed that Trump did best (as compared to Romney's performance four years ago) in the counties with the highest drug, alcohol, and suicide mortality rates. In other words, the communities that love Trump the most, and invest the most naive trust in his lies, will suffer the most when his gang dismantles the safety net.

He flaunts his corruption (hat tip: JF) and dares anyone to object:


According to the latest Federal Election Commission filings, Trump directed close to $3 million in campaign funds towards Trump-owned properties between Oct. 20 and Nov. 28. Tag Air, Inc., the Trump-owned company that operates his personal jet, raked in $2,055,786 in travel expenses. A small galaxy of Trump-branded properties — various hotels, golf resorts, and restaurants — collected an additional $777,672.83.

I did not order this shit sandwich.

I was with a bunch of people who wanted to try out this new restaurant. They said it was the best; you could get the best food there, and we would really love it. Well, I'd heard it wasn't that great, and I said so, but they all said, no, no, it'll be great! You have to come! So we get to the restaurant and the head waiter, a fat orange guy with a comb-over, hands us menus, and there's prime rib and lobster and all kinds of other enticing dishes, and they're all really cheap! So we all order the prime rib.

Pretty soon the waiter comes back and sets our plates in front of us. And on each plate is a shit sandwich. Nothing else -- not even a pickle or a sprig of parsley. And this one guy in our party, the guy in the red baseball cap who wanted so badly to come to this restaurant, says, Hey, what's this? We ordered the prime rib? And the fat orange waiter just laughs and says, Oh, that's only available in the private dining room upstairs. Everybody else gets shit sandwiches.

So everybody's really pissed and bewildered. I'm pissed too, but I already knew I'd get a shit sandwich, and I said, See, I told you so. Shit sandwiches for everybody!

Knowing that everybody else got one too didn't make mine taste any better.

[Hattip Dick Sloop, who purloined it from the Democratic Underground]

Posted by J.W. Williamson at 12/10/2016 09:43:00 AM
Email ThisBlogThis!Share to TwitterShare to FacebookShare to Pinterest
Labels: Donald Trump

Another example of The Big Lie: Trump has been bragging that he won with one of the biggest electoral victories in history. Just plain wrong. Seven of the last 10 victors in the race for president had larger electoral numbers than Trump.

Here's another lie he just told in the last 24 hours: "I will spend zero time on the new season of The Apprentice." Ha! He'll be obsessed with it, as he always has been.