Dick-Wagging Toward the White House 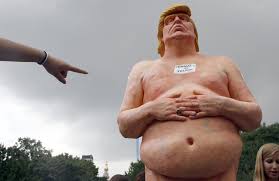 What we've been through in North Carolina with power-hungry, overreaching Republican lawmakers ... that's what we're about to go through in the nation, with a president and his locker room boys who cannot, will not moderate. They are going to overreach. They are going to live up to their advance billing: arrogant fools who think they're somehow divinely sanctioned.

Trump has continued to tell The Big Lie, that his victory was an unprecedented landslide. Only he spelled it "unpresidented," and when he puts it that way, I'll have to agree.

Franklin Graham underscored the divine thing at the last Trump "thank you" rally in Mobile when he introduced the president-elect: Trump was elected by a spiritual force, Franklin said. “I believe it was God.”

Love your enemies, bless them that curse you, do good to them that hate you ... O, forget it! Trump's victory tour has been more of the same hateful scorn directed at his perceived enemies -- the media, CNN in particular, John Kasich, people who didn't vote for him. "Lock her up! Lock her up!" his acid-washed adorers have continued to chant.

Once -- maybe just once -- Trump actually said something factually true at one of those rallies:

“You people were vicious, violent, screaming, ‘Where’s the wall?’ ‘We want the wall!’ Screaming, ‘Prison!’ ‘Prison!’ ‘Lock her up!’ I mean, you were going crazy. You were nasty and mean and vicious.”

Then he immediately reverted to what was demonstrably not true, which is his usual rut:

No, they're not any of those things. They've taken their seats in the Colosseum and want to see some blood in the sand. They want to see their Sampson slay a thousand Philistines, and he's certainly got the ass's jawbone for it.

He's too vain and petty not to perform for them. He'll go too far. He'll overreach. He'll follow the path of rich-man folly. And suffer the consequences, because that screaming crowd in the Colosseum has no brain and is preternaturally fickle.

Posted by J.W. Williamson at 12/19/2016 10:30:00 AM
Email ThisBlogThis!Share to TwitterShare to FacebookShare to Pinterest
Labels: Donald Trump

I see that several electors have listened to the people, and their pleas for reason and decency.

They changed their vote from Clinton.