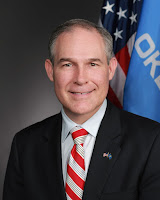 Trump has selected Scott Pruitt, the attorney general of Oklahoma and beloved of the fossil fuel industry, to run the Environmental Protection Agency. Pruitt is pretty famous for being a climate change denier.

“During the campaign, Mr. Trump regularly threatened to dismantle the E.P.A. and roll back many of the gains made to reduce Americans’ exposures to industrial pollution, and with Pruitt, the president-elect would make good on those threats,” said Ken Cook, head of the Environmental Working Group, a Washington research and advocacy organization.

“It’s a safe assumption that Pruitt could be the most hostile E.P.A. administrator toward clean air and safe drinking water in history,” he added.

Mr. Pruitt is actually suing the agency he will head, suing over regulations aimed at forcing power plants to significantly reduce their emissions of planet-warming carbon dioxide pollution.

Another day, another assault on the public good.