Moscow on the Potomac

Come on, Bubba, didn't we know it all along? American intelligence sources have "high confidence" that Russia was interfering in our election to cripple Hillary Clinton and help Donald Trump get to the White House.

Worse, American officials -- including, very likely, Mitch McConnell -- knew it, knew it in spades, and chose to stay quiet about it. James Comey at the FBI decided that inconsequential emails on Anthony Weiner's computer were far more earth-shaking than the subversion of our government by the Russians.

Trump knew it. When he invited the Russians to hack his Democratic opponent's email at that press conference on July 27th, he was projecting what he already knew was going on, because he can't resist bragging and wagging his dick. Ever.

Tell me that ain't treason.

BTW, Trump hasn't had another press conference since.

It's also come to light that the tiger they've bedded down with -- Vladimir Putin -- -- also hacked the National Republican Party and has their shit in his back pocket. High stakes blackmail, should prominent Republicans with embarrassing emails in their past choose at any time in the future to oppose Mr. Putin and his newest butt-buddy, Donald J. Trump, in their world conquest. (FBI Director James Comey, who had a Trump sign in his front yard [see below], was very recently saying that the Russian attempt to hack the Republican Party had been unsuccessful.) 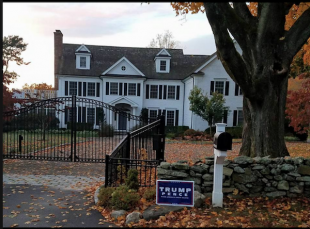 When the CIA's secret conclusion came out yesterday about overt Russian shenanigans undertaken for Trump, the "Trump transition team" (Jared Kushner?) could not resist another big lie while also attacking the intelligence agencies:


“These are the same people that said Saddam Hussein had weapons of mass destruction,” the statement said. “The election ended a long time ago in one of the biggest Electoral College victories in history. It’s now time to move on and ‘Make America Great Again.’ ”

One of the Biggest Electoral College victories "in history"??? No, not even close. That's total bullshit. Trump took 306 electoral votes, to Hillary's 232. How does his number compare?

It is way more than merely a good thing that Mr. Obama has ordered intelligence agencies to assemble a detailed report of “lessons learned” about the Russian hacking before he leaves office on Jan. 20 -- a comprehensive history of the Russian effort to undermine democracy ... so that the truth isn't somehow lost shortly following "I do solemnly swear that I will faithfully execute the office...."

Putin now has everyone by the balls.
Soon there will come a day when Trump pisses Putin off, thinking he's invincible and no longer willing to be the 'loser' in the dick contest.
We'll all soon be at the mercy of Putin.

At least Nixon hired his own third-rate burgers for Watergate. Trump outsourced the jobs to Russia.

You lost all credibility when you mentioned McConnell.