Government Is About Cashing In, Yes? 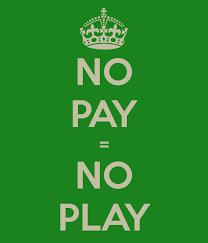 Everything's for sale in Trump Nation, especially access to The Man Himself.

Came out that Don Jr. and Eric Trump "dangled a rare opportunity for donors willing to pony up $500,000 and more" to hang out with the new president on the day after his inauguration (photo-op included at no additional charge!) and go on a hunting or fishing trip with one of the brothers. Donors willing to go up to $1 million might get to kiss The Donald's naked ass.

"In the weeks since Mr. Trump’s election, three of his four adult children, who are serving on his transition committee, have been a near-constant presence. One or more of them have participated in a meeting with the prime minister of Japan, joined in on a phone call with the president of Argentina, and sat at the conference table where Mr. Trump met with leaders of major technology companies."

Ivanka has a big hand in promoting Trump properties world-wide, and she owns Ivanka Trump Fine Jewelry. She wore a $10,800 gold bangle bracelet when she participated in an interview her family did with “60 Minutes,” and, like, 30 minutes later, her jewelry company sent out a notice to reporters with a photograph of her wearing the bracelet, trying to use the appearance as an opportunity to sell more items. “Please find attached a style alert of Ivanka wearing her favorite bangle from the Metropolis Collection over the weekend on 60 Minutes,” Monica Marder, the vice president for sales at Ivanka Trump Fine Jewelry, said in the email.

The Eric Trump Foundation famously offered "coffee with Ivanka Trump" for a measly $77,888 -- that is, they offered that inducement until the press got wind of it, and then the offer evaporated like Donald Trump's hairspray. Same goes for that $500,000 to $1 million offer of access to the new president on the day after his inauguration -- withdrawn quickly after it became public.

Remember how Republicans were outraged when Bill Clinton was supposedly selling nights in the Lincoln Bedroom? They're totally and utterly silent now. Are they not the biggest hypocrites we've always known they were?

This from a whole bunch of truth deniers. Where everything that was real is now fake and all that was fake is now more fake than ever before. Welcome to the New America.