Distinguished NC Republican Calls Trump "A Danger to the Country" 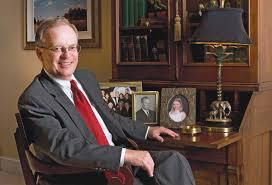 Robert F. "Bob" Orr, a former Republican justice of the North Carolina Supreme Court and a delegate to the Republican National Convention in Cleveland, has left the Trump coronation but not before telling a WRAL reporter that Trump is “singularly unqualified to lead this country.”

Orr led the John Kasich campaign in North Carolina. His candor about Trump earned him a denunciation from Dallas Woodhouse, executive director of the NC GOP: Orr “hasn’t been a good Republican for a long time,” Woodhouse said.

"Good Republican." Whatever that means to Woodhouse, we doubt you could find a Republican Party regular with a more distinguished pedigree. After he was appointed to the NC Court of Appeals by Republican Governor Jim Martin in 1986, he won election to the Supreme Court in 1994 and served there for ten years. He ran for governor in 2008, losing to Pat McCrory. He would have made a hell of a better governor.

He even served for a few months in 2014 as the appointed District Attorney for the 24th Prosecutorial District, which includes Watauga County, after the resignation of DA Jerry Wilson.

He's a principled conservative, and he's read the character of the Republican presidential nominee correctly. Upon departing Cleveland, Orr said, ruefully, “I’ve had all the fun I can have.”

No matter what kind of spin Woodhouse and Company want to put on it, the GOP's big tent has collapsed and the party has been taken over by hard-line extremists, conspiracy theorists, and outright racists.

The drama will continue after the election - behind the scenes in Cleveland, moderate Republicans that are part of the Tea Bagger's much hated "establishment" are plotting how to regain control of the party.

Bob was a law school classmate of mine. Great guy

Being principaled: is that sort of like being kinged in checkers? Was Mr. Orr perhaps made a principal at some point in his career? I think your point was that he is a man of principle. C'mon Jerry, I know it's been years since you had to teach English, but....

Bro Doc, Just because I was an English teacher doesn't mean I can spell.

Bob Orr is a great friend and a great man. It is ironic that he swore me in as Distrct Attorney and then finished my term nearly 12 years later when I resigned as a result of illness. I worked hard for Bob during his campaign for governor; I agree he would have been a great governor. I hope Bob will not leave NC Republican politics, but will continue to carry the flag for us, admittedly few, moderates.