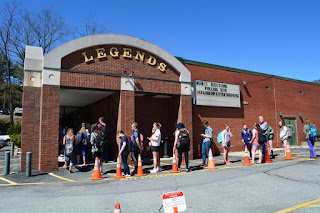 The court found that North Carolina's Republican lawmakers requested data on racial differences in voting behaviors in the state. "This data showed that African Americans disproportionately lacked the most common kind of photo ID, those issued by the Department of Motor Vehicles (DMV)," the judges wrote.

So what did the Republican legislators do? They made it so that the only acceptable forms of voter identification were the ones disproportionately used by white people. "With race data in hand, the legislature amended the bill to exclude many of the alternative photo IDs used by African Americans," the judges wrote. "The bill retained only the kinds of IDs that white North Carolinians were more likely to possess." [The Gen'l Assembly also eliminated NC University IDs as acceptable, for reasons we completely understand.]

The data generated for the use of Republican lawmakers also showed that black voters were more likely to make use of early voting — particularly the first seven days out of North Carolina's 17-day voting period. So what did those lawmakers do? Naturally, they eliminated these seven days of voting. "After receipt of this racial data, the General Assembly amended the bill to eliminate the first week of early voting, shortening the total early voting period from seventeen to ten days," the court found.

The panel of Fourth Circuit judges also found an actual "smoking gun" of outright and obvious racial discrimination. The state argued in court (in front of the now notorious Judge Thomas Schroeder in Winston-Salem) that "counties with Sunday voting in 2014 were disproportionately black" and "disproportionately Democratic," and said it did away with Sunday voting as a result:

"Thus, in what comes as close to a smoking gun as we are likely to see in modern times, the State’s very justification for a challenged statute hinges explicitly on race — specifically its concern that African Americans, who had overwhelmingly voted for Democrats, had too much access to the franchise," the judges write in their decision.

"Too much access." Of course, the Republican changes to NC election law do not directly account for the suppressive actions locally of the Watauga Board of Elections and County Attorney "Four" Eggers, but the Eggers/Aceto junta have obviously and blatantly believed that college students had too much access to voting and needed to be curtailed.

"Faced with this record," the Fourth Circuit judges end, "we can only conclude that the North Carolina General Assembly enacted the challenged provisions of the law with discriminatory intent."

Governor Pat McCrory immediately both whined and thumped his chest in his best rendition of Macho Man: "...three Democratic judges are undermining the integrity of our elections while also maligning our state. We will immediately appeal and also review other potential options."

Focus for a minute on McCrory's first charge: "undermining the integrity of our elections." According to Christopher Ingraham, "One of the most comprehensive studies on the subject found only 31 individual cases of voter impersonation out of more than 1 billion votes cast in the United States since the year 2000. Researchers have found that reports of voter fraud are roughly as common as reports of alien abduction."

Voter fraud has always been their claim. It's bogus. And the American courts so far know it.

FOOTNOTE ON McCRORY'S THREAT TO APPEAL
Good luck with that, Guv! You can ask the entire Fourth Circuit to sit en banc and perhaps overrule the decision of the three-judge panel, but it's unlikely to happen. The Fourth Circuit does not usually respond favorably to petitions for full-court review.

Or you can go to The Supremes, but since your Republican brethren in Washington, featuring prominently senators Burr and Tillis, have refused to even consider the nomination of Merrick Garland to replace Scalia, you're probably facing another 4-4 split, which will mean that the Fourth Circuit's decision stands.