A Bad Law You Might Not Have Heard About ... Because There Are So Many 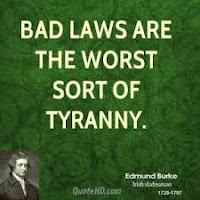 One of the worst new laws passed by the NC General Assembly in the so-called "short session" and signed by Governor Squishy -- among so many bad new laws -- was H972, "Law Enforcement Recordings/No Public Record."

The law declares that police body-cam and dashboard camera footage is not a public record but will be kept secret unless citizens can get themselves in front of a judge who will order it released.

What could possibly prompt such a law? Knowledge is power, whether it's knowledge of how a suspect or an arresting officer behaved "in the field." Secrecy, especially when it's for the benefit of the armed reach of the government, is more fitting for North Korea than for North Carolina.

If the police have a compelling reason to suppress video footage, then they should be the ones going to court to make their case.

But McCrory signed this piece of government overreach and then took off for vacation. Hope his tan is developing nicely.

Oh, thanks! I thought he signed everything before taking off for vacation. If he hasn't signed, he'll probably let it become law without his signature, no?