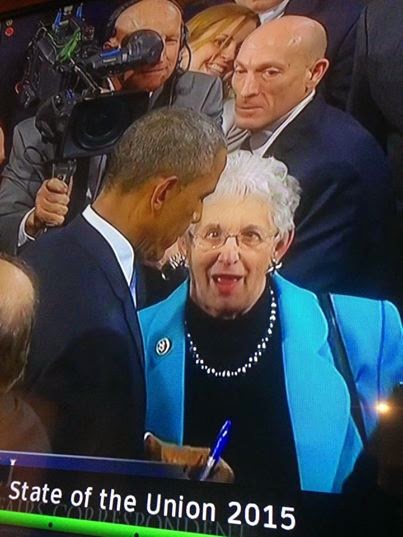 Some things about the State of the Union ... you just couldn't make up. Virginia Foxx's fame-whore rush to get the president's autograph, despite what he stands for as opposed to what she stands for, despite what he just said in that speech, despite the embarrassing optics of her fawning ... well, it's cringe-worthy.

Even more gag-inducing ("Gag me with a dipper, y'all!") was Joni Ernst's #breadbag brag that she knows everything there is to know about being poor, so y'all should just cheer up about your low wages 'n' stuff, because she's made it to the U.S. Senate!

Someone on Facebook observed that fake poverty screams as loudly as does a fake Southern accent.

As does the hypocrisy of the Lady in Blue.

ADDENDUM
Yep. She pours acid out of that side of her mouth that isn't simultaneously drooling. From Carolina Public Press:


Rep. Virginia Foxx, who represents a portion of Western North Carolina in the state’s 5th Congressional District, slammed the president’s speech, declaring him “mired in the past.”

“The American people spoke loud and clear in November, but it’s evident from tonight’s State of the Union that President Obama wasn’t listening,” Foxx said in a news release. “Despite a rejection of his policies at the ballot box, the president continues to propose outdated, Washington-centered ideas that simply don’t work.”

Foxx, who was elected to a sixth term last year, decried the president’s proposals on tax reform and higher education, calling the latter a “top-down federal government boondoggle.”

Still, the congresswoman thought highly enough of Obama to ask for what appeared to be an autograph on the floor following his address, causing a buzz among social media users who spotted her on TV.