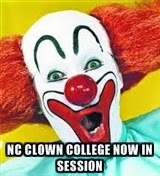 The Republican paint-strippers in the NC General Assembly are not happy with the new abortion clinic rules put out by the McCrory administration a couple of months ago. Their legislative plan had been to impose such strict rules that most abortion clinics would have to close, but the writing of new rules went to Aldona Wos's Health & Human Services department, which suddenly became all squishy and moderate on the topic of women's rights.

The new clinic rules -- turns out -- wouldn't force the closing of any clinics.

The hard right in the General Assembly ain't taking that lying down. They say that they'll now write a new law with their own regulations. With Rep. Paul "Skip" Stam, who intends to end abortion forever for everyone, no matter what, you can guess what's coming down that pike.

The priorities of the Raleigh Republicans: punish gays and sexually active women, keep people who don't agree with them away from the polls, and make sure the poor know their place.

Their notion of getting more jobs into the state seems confined to the mortuary industry.