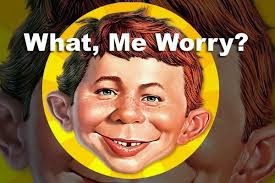 Raleigh Republicans are totally cool with it. Not to worry. No sweat. Not a big deal. Nothing to see here.

But what if the deficit gets worse, considerably worse, in the next six months? "Asked about that last week, Senate leader Phil Berger said he doesn’t want to get into hypotheticals" (The Daily Reflector).

We bet he doesn't. Instead, he wants to pivot to the obligatory bashing of prior Democratic regimes (always a good move) and to vague promises that the Lord will probably -- might or for sure will -- provide: “We were able to deal with a $2.5 billion shortfall,” he said, referring to 2011. “If we end up with a situation where we are short from projections, we’ll manage, and we’ll manage in a way that will continue to move North Carolina in the right direction, continue to move North Carolina forward.”

At least some people -- the very rich and large corporations -- are getting very forward with the new Republican flat tax in North Carolina. The rest of us ... not so much, especially school teachers, university employees, the long-term unemployed, people who used to work in the NC film industry, and numerous others who had the bad judgment not to hire expensive lobbyists.