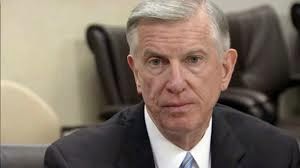 Thomas Mills started a little boomlet touting Tom Ross as the Democratic candidate to take on Dick Burr for the U.S. Senate seat in 2016.

Ross was fired as President of the University of North Carolina system on Friday in what is emerging as the most nakedly political firing of recent history. Board of Governor members -- Republicans, mostly -- made the decision, but it was the Board Chair, Republican John Fennebresque, who stumbled around at the subsequent press conference -- the most bizarre press conference you'll ever see -- saying how wonderful Tom Ross's leadership has been, but, we -- uh -- need his wonderfulness gone.

Politically, powerful Republican members of the NC General Assembly apparently wanted Ross out. So they could have someone more to their ideological liking in? Well, duh. But will it be Art Pope, who apparently has been overheard to say he'd like the job? If so, expect cloudy weather with a threat of shit-storms.

But back to the question at hand ... Tom Ross for U.S. Senate?

Ross has spent most of his life in academic settings and in academic pursuits, managing academics. That might automatically qualify him as a superior "hand" at handling hungry crocodiles. But with all due respect, I haven't found academics particularly ready for the prime time of high-level politics, especially at that national level, where some political experience might be considered pretty essential.

The late, great Paul Wellstone, excepted -- the exception which proves the rule.

You are selective in reporting. The biggest scandal on a college campus in the US took place at UNC and Ross was silent. The school spent $1.6 million dollars of taxpayers money in a PR campaign to roll out the cheating scandal. Ross was silent. The treatment of female students on college campus and Ross is silent.
The Democrats have forced corruption on the State of North Carolina for the past hundreds of years through redistricting and the UNC Board of appointments. How dare you support this bunch of criminals and their activities? This is not the pot calling the kettle black, this is pure evil at its best. You are talking the talk but not walking the walk. Ross needed to go. He had/has no backbone.

If any of that was the reason for his firing, Anonymous, why the hell didn't the chair of the Board of Governors say it at the press conference? All he did was praise Tom Ross.

Oh,Suzannah,
I do not care what the Board Chair said. I read the account of an African American basketball player from Western North Carolina and his experience while on the basketball team at UNC-Chapel Hill. He received death threats for his telling of his story. The loser are/were the students involved in this scandal. It will impact them for the rest of the lives. They do not have a quality education.Keeping Ross would have done nothing to right this wrong. Hell, he never acknowledged it needed correcting. Too many people turned their backs and looked the other way just as they did at Penn State. There is no way to justify these activities and the lack of leadership by Ross.