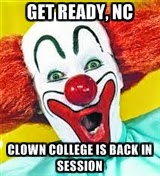 The Republican-dominated General Assembly of North Carolina reconvenes at noon today, and the trouble will start at approximately 12:01 p.m.

Expect a flurry of The Cray-Cray, starting with Rep. Skip Stam's artfully titled "Religious Freedom Restoration Act," which is really a license to discriminate against The Gay, if you feel so led by whatever god you're genuflecting to this week. It's no big secret that Stam's proposed law is meant "to ensure that private business owners have the right to refuse service to customers on the basis of their religious faith."

Read more here: http://www.newsobserver.com/2015/01/27/4509542_legislators-expected-to-attend.html?rh=1#storylink=cpy
Stam has long been the leading jihadist for theocracy in the General Assembly, a hardliner on women's abortion rights, and he intends to be gay people's biggest nightmare as well as an Olympic generator of lawsuits and taxpayer-funded lawyer fees.

The N.C. Values Coalition, led by the helmet-haired Tami Fitzgerald, is holding a private "briefing" on the new legislation for lawmakers this afternoon. The public and the press ... don't even try to get in.

Not to be out-done, NC Senate dictator Phil Berger "said last fall that he plans legislation that would allow magistrates and registers of deeds to refuse to participate in same-sex marriages if it goes against their religious beliefs."

Because -- you dull-witted citizens out there! -- the biggest threat to North Carolina and the "problem" that outweighs every other issue facing us in 2015 is The Gay and the shuddering thought that they can now marry. And eat chicken-'n-dumplings in your sacred restaurant.