How Extreme Is the New Anti-Abortion Bill in the U.S. House? 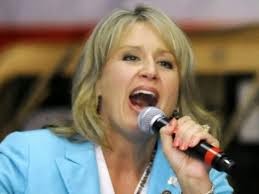 So extreme that even NC Rep. Renee Ellmers opposes it. Ellmers, in fact, is credited with leading a revolt of Republican women against the bill. Without the votes to pass it, the Republican leadership in the U.S. House pulled the bill last night. (Oh, it'll come back eventually, my brethren. Republicans love their rituals.)

The vote was supposed to happen today to coincide with the 42nd anniversary of Roe v. Wade. It was all show, of course, since any of the far right's anti-abortion legislation has zero chance of becoming law until Rick Santorum sits in the Oval Office.

But ... Ellmers? Reportedly, she was upset over the rape provisions in the bill, and she rallied other Republican women to her side. (No mention of Virginia Foxx in any of the reporting, but you know she's not going to buck the Catholic hierarchy, let alone the bulls in Congress.)

The bill was creatively named the "Pain Capable Unborn Child Protection Act." (Oh Republicans!) It would ban abortions after 20 weeks, even in cases of rape, unless the mother filed a police report.

The fury against Ellmers by Tea Partiers, and others determined to legislate women into becoming involuntary breeders, has already erupted. (Which is precisely why you won't see Virginia Foxx taking a public stance on the bullshit being shoveled by her male colleagues.)

UPDATE: ELLMERS GIVES UP
Raleigh News&Observer is reporting that Ellmers couldn't take the heat from the pro-lifers. So much for that profile in courage!

Forced-birthers are at it again.

I have never come into contact with a female I attended college with that had abortion is quite with it today. Some had a nervous break down. Many have joined support groups that is similar to AA. They celebrate the birthday date and the date of the abortion. This is not political bull shit. This is real life situations from attendees of a very liberal college. It never ends with the abortion. Be careful for what you ask.

Sorry, Anon 2:53, but that sounds like the biggest crock of b.s. I've seen all day -- a combo of revenge fantasy (take that, you whores!) and wishful thinking. If you know ONE such female you "attended college with," I would suggest that you not start wildly generalizing, something they should have taught you in college to avoid.

Liberals absolutely cannot deal with facts especially the aftermath of abortion. Get your damn head out of the sand and start dealing with reality. Some people travel from pole to pole and some see the donut and see the hole. You are so bling you see nothing not even your prejudice.

Oh, you dudes never disappoint, getting on your almighty high horse when the subject turns to abortion ... laying down The Law, cussing out all them women, flailing about like you're Moses Himself come down from Mt. Nebo. What complete and total jerks you are.

How many positive abortion stories would it take for Anon 2:53 to change his mind? I'm guessing thousands wouldn't make any difference because he/she knows what's best for everyone else anyway!

Anon 2:53 & other anti-abortion activists are adept at taking an anecdote or two, adding a dose of fantasy and cognitive dissonance, and creating completely unrealistic scenarios in their minds.

I don't doubt that there are some women whose lives were affected negatively by having an abortion, especially if they come from families or cultures where they are made to feel as though they have committed some heinous crime by having made that decision. Guess what, if everyone around you is telling you that abortion is murder and you'll burn in hell for it, that might just make you feel bad. But I can assure you that there are also many women who had abortions and are confident that was the right choice - and others who did not and may wish they had. That's not a happy thought but it's the truth.

Rather than shaming women, I'd like to see us empower them to feel confident and dignified in making decisions about their own bodies and their own rights. And provide free and easily accessible birth control to prevent unwanted pregnancies in the first place! Only when I hear Republicans supporting that will I believe they're truly seriously about reducing the number of abortions in this country.

You just talk, no real life experiences.
Liberal can not deal with the truth.
PS I am a female, down and dirty. I have walked the walk and talked the talk. You are a liar and the truth is not in you if you maintain a woman can have an abortion without guilt.

You don't know me. I don't know you. I don't presume to know all you've been through in your life; don't you dare presume that I have no "real life" experiences. You have no idea.

Oh, yeah, Anon 10:46? Female, huh? So when did you have your abortion? It obviously made you an expert. And when did the overwhelming guilt set in? Was it the guilt that robbed you of any sympathy or fellow-feeling? Was it the guilt that made you so mean and nasty? You remind me very much of that other "female" who posts as Jonny Rico over at Watauga Conservative, who thinks that generalizing outrageously about everybody is the ticket. If you knew anything beyond your narrow prejudices, you might be worth the trouble.

I'm just going to use my new favorite question on this topic. Using conservative "logic" no less.

Typical con on guns: "If you outlaw guns only criminals will have them!"

Ok now lets replace gun control with abortion in that sentence. See the issue yet?

Because my dear anon, you can hate that immoral "baby killing" process as much as you and Republican Jesus want. But it boils down to this, you aren't going to stop it even if abortion became illegal in every form this instant.

All you would do is force women back into the bad old days of oil of Tansy turning insides to mush, backroom apartment procedures in unsanitary conditions, stairways, and coat hangars, oh or maybe sneaking across the border to buy abortion drugs from Mexican markets (thanks Texas!)

Now if you really claim to care about women as much as your party would have us believe, do you really honestly want to go back to that? Making women criminals for daring to have a choice about what happens to their body? And risking their life to do so?

Oopsie, did I derail another "debate" by trying to force one of our right wing anon's to try and answer an actual hard question again? And pin themselves to a stance on an issue?