Watauga County owns the Brookshire Greenway, which runs behind Ted Mackorell Soccer Complex. It cost the county pretty much nothing, because it was built with grant money. But our Watauga County Commissioners -- David Blust chief among them -- have refused any upkeep for that greenway, which is used daily by many Watauga Countians. This photograph was taken this morning. It is wholly characteristic of the entire length of the path. Very tall (and short) weeds are growing at the edge of the pavement, in some places constricting the space needed by pedestrians to pass one another. 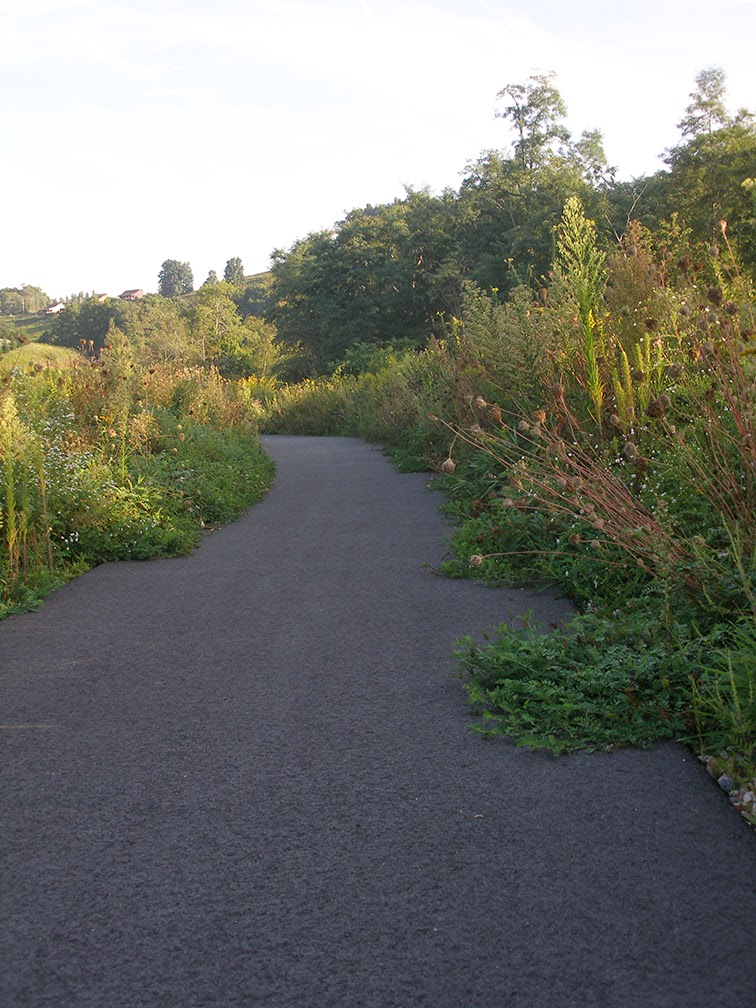 It's a shame to allow a public asset like this walking path to become overgrown through plain-old governmental neglect. On at least one stretch of Brookshire greenway, black locust saplings have grown up quickly right on the edge of the pavement. A sickle bar at this point probably wouldn't cut them. By next year, they'll be trees, and walkers will have problems brushing past their thorns.

How many times have I heard Mr. Blust express resentment that the county might have any upkeep obligations on greenways and bike parks? That resentment of his toward spending any county money to enhance the benefit to the public of recreational walkways made it into a Watauga Democrat article last year:


"Not everyone is as enthusiastic as others about the planned trail projects. County commissioners Perry Yates and David Blust last month voted against an environmental assessment contract for the 421 underpass. Blust expressed concerns about the future costs of maintaining the trail."

This is merely Tea Party-ism elevated to public policy, the philosophy that government has no role -- or even a right, really -- to own and maintain infrastructure for the delight of the general population.

Watauga County has been in the grip of this philosophical stagnation for four years now. The voting public has an opportunity to change things in November, especially that lack of vision.

What a bleak vision of society these Republicans have., A dog eat dog social Darwinism, where the wealthy live in opulent compounds and the rest of us fight for the scraps left over. No sense of community, no cooperation, no helping hands, no joy or beauty, except for the privileged few. God help us if they are the future of this country.

Back in May there were thousands of polliwogs in a shallow rainwater pool right beside the access from the soccer parking lot. And twice I've seen hawks circling out there. It's a lovely place to walk, especially for smaller dogs and babies in buggies. Do you reckon the money-hoarding ones might be trying to shove maintenance costs off onto any succeeding Dem administration?
Not too cynical, oh you bet.

Republicans care nothing about the common good. From Virginia Foxx to Tom Tillis to Anne Marie Yates and her little hubbie and extended family, Nathan Miller and David Blust, they see government as nothing more than a way to help their friends and punish their enemies. This is not a new story, but rarely has it been so in your face as now. When will people wake up?

I walked the trail for my first time last Friday. And, I thought this was 100 foot vegetative buffers between the trail and rivers and streams gone bad! LOL. Are they keeping up the soccer fields? Noticed some River bank erosion which needs immediate attention.

OMG, that paved trail through a natural area is enough to scare an intrepid urban liberal away. They could be exposed to wildflowers, birds, bees and butterflies!