Raleigh: Where the One-Eyed Man Is King and the "No-Bid Contract" Is Queen 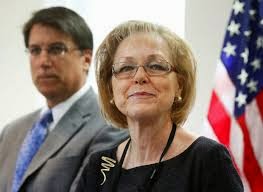 So there's the ineffable Aldona Wos, Governor McCrory's Secretary of the North Carolina Department of Health and Human Services (DHHS), who takes only $1 a year in salary but who more than makes up for that frugality by hiring outside contractors in sweetheart deals who are costing millions just to do the work that DHHS is mandated to do.

The "no-bid" contract that got the spotlight yesterday went to Washington "turn-around" firm Alvarez & Marsal, whose team of "experts" are earning salaries that would choke a South Carolina mule. The lowest paid Alvarez & Marsal "analyst" -- and there are nine of these cats -- make $242 an hour -- an hour -- and the "principals" of the firm are pulling in between $473 and $394 a freakin' hour.

So, thanks, Aldona Wos, for saving us that money on your salary. We're obviously getting what we pay for.