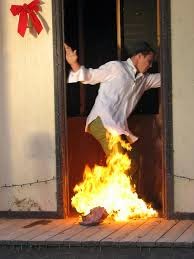 The clock is ticking down to January 1, 2015, when some 1,500 different property owners in the former Boone Extraterritorial Jurisdiction will suddenly be without the zoning protections that many of them have depended on for years.

With a 3-2 Republican (and virulently anti-zoning) majority on the County Commission, we don't feel any urgency on the parts of Nathan Miller, David Blust, and Perry Yates to reinflate the ship that Sen. Dan Soucek and Rep. Jonathan Jordan have generously sunk for the benefit of a handful of developers.

It'll be a huge job for the County Planning Board to come up with a recommendation -- something that's probably going to take more than the three months left in this quickly waning year. Which means the 1,500 property owners get thrown to the wolves on January 1st, or the County Commission enacts a moratorium on development until regs are written, debated, and enacted.

It's a fine mess that Soucek and Jordan left us.

I attended the meeting last night of the Watauga County Planning Board. They took up for the first time what to do about the former ETJ. Some of their members weren't present, but I detected mainly good will on the part of those who did bother to show up. They want to help the neighborhoods, and as a first step they're scheduling a series of community meetings to understand the problems and gather opinions on what to do.

Meanwhile, the clock keeps ticking. The ideological make-up of the guys with the power to do something, anything -- the County Commission -- isn't guaranteed to support a moratorium on development while the Planning Board completes its work.

Except … except … there'll be an election before the first of the year, and new Commission members will take their seats early in December, so things could turn around suddenly. Or not. Depends on what county voters want: the cronyism and corruption of Raleigh office-holders who'll sell you out to the highest bidder, or patient regs meant to protect property values and the quality of life for all residents.

Since Mr. Miller represented Boone Ready Mix to try to get it out from under the control of Boone zoning, it would be a little bit of surprise if he did anything to help the people whose lives and desire for peaceful enjoyment of their homes he belittled, wouldn't it?

Does the owner of the Ready Mix property not have a right to enjoy his property? Are those being "protected" all independently wealthy so they don't have to work and there's no chance their jobs could be zoned out of business?

Anonymous 1:52, I have a suggestion: the next time that an asphalt plant, cement facility, chemical storage facility, or other polluting industry wants to set up shop around here, we can tell them to purchase the property right next to your house and have at it! Problem solved!

Where is the proof that the bill was "bought" by wealthy developers? Why is nothing being said about the Town of Boone's abuse of its citizens over the last 35 years. Why is there nothing said about the Town of Boone's refusal to complete the legislation and provide services to its ETJ areas? Why is there nothing said about residents of the ETJ unable to vote for or against those imposing the restrictions under which they must abide? Where is the outcry for the folks who lost millions when the Steep Slope and View Shed ordinances went into effect in the face of 400 citizens amassed to fight them? Mr. Williamson, your one-sided argument is thin at best.

DooDah, I live very close to an asphalt plat. It is closer than the proposed plant would have been to Seven Oaks. It doesn't bother me a bit. There is no problem with putting one anywhere.

Doodah. The asphalt and cement plants were there first.

7745Anonymous 6:19 AM said "Doodah. The asphalt and cement plants were there first."

This is untrue. The Seven Oaks residential neighborhood has been there since the 1970s and Boone Ready-Mix swooped in in the late 1990s right before the area got incorporated into the ETJ. Please stop making these false statements.

"There is no problem with putting one anywhere."

OK.... how bout we put one, oh, let's say, on the banks of the New River near Todd on the Watauga/Ashe border. How do you feel about that??

". how bout we put one, oh, let's say, on the banks of the New River near Todd on the Watauga/Ashe border. How do you feel about that??"

There is no problem as far as I am concerned.

"OK.... how bout we put one, oh, let's say, on the banks of the New River near Todd on the Watauga/Ashe border. How do you feel about that??"

It would certainly be no more harmful than dumping Boone's sewage into the river would be.

Boone doesn't dump its sewage into the river. It discharges treated waste water, just like many other towns and cities do. You make it sound like raw sewage is being pumped into the river. Get a grip!