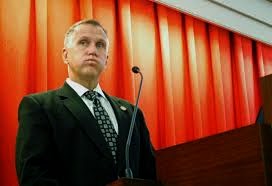 Intensely interesting and informative summary of Thom Tillis's meteoric rise from Cornelius city councillor to Speaker of the NC House and now candidate for U.S. Senate, with a lot of insightful reminders of the tensions that have existed between the basically "moderate Republican" Tillis (whatever that may mean now) and the much more extremely conservative leader of the Republican NC Senate, Phil Berger, who's really running things in Raleigh.

Tillis comes off as a kind of Sammy Glick, an overly ambitious "climber" who's learned to mainly keep the clamminess of his ambition out of sight. A man afraid to buck the "raging conservatives" of his own party. A politician whose upward mobility is far more important than principle.

Damn, after Tillis serves a few years in the US Senate, he should run for President. Obama didn't seem to shy away from being a "climber."

he wants to eliminate medicare and not allow people to refinance student loans. that's enough for me not to vote for him!