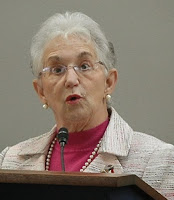 “Seventy-percent of the labor force in agriculture is undocumented,” Bert Lemkes, co-owner of Van Wingerden International, a greenhouse manufacturer in Western North Carolina, said at a forum in Raleigh recently. (Hattip: Rob Christensen in the Raleigh News & Observer)

That's a fact that Congresswoman Virginia Foxx knows very well. Her own landscaping business depended on immigrant labor, though, Lord knows, she herself never hired any undocumented landscapers. Heavens no! (The Foxx family went to some lengths to cover up details about an accident with serious injuries caused to a third party by one of her laborers, who later escaped the hospital and disappeared without a trace. You can read about that case here and here.)

Though Congresswoman Foxx built her empire on the backs of immigrant labor, when she was elected to Congress she immediately became one of the flamers willing to make political hay out of brown-skinned immigration. In 2005, Foxx signed on as a cosponsor to Sue Myrick's bill to punish North Carolina for granting driver's licenses to illegal immigrants. (Screening and testing the undocumented for driver's licenses is a public safety measure, which considering the bad car wreck one of Foxx's workers was involved in -- see the links above -- you'd think Foxx would support.)

She also co-sponsored a provision in federal law that would have made it a felony to offer any assistance whatsoever to an illegal immigrant. The law would have allowed the federal government to seize personal assets of those caught passing out meals, medical aid, or legal advice.

Probably her finest hour came in the spring of 2006 when Foxx hosted a special Congressional panel in Winston-Salem with this ominous name: "Gangs, Fraud and Sexual Predators: Struggling with the Consequences of Illegal Immigration." My links to articles at the time in the Winston-Salem Journal have rotted, but there was this coverage of Foxx's anti-immigration grandstanding which still captures the aura of unjustified self-righteousness that always puddles around Foxx's ankles.

As long as Foxx and Friends dominate the House of Representatives, and are financially propped up by U.S. businesses that actually depend now on the labor of both legal and illegal immigrants, there will be no humane progress for immigration reform.

Leviticus 19:34 The alien who resides with you shall be to you as the citizen among you; you shall love the alien as yourself, for you were aliens in the land of Egypt: I am the Lord your God.

It all depends on the version of the Bible you use. Some say stranger instead of alien. Others say foreigner. Neither is accurate. Slave would be more historically correct.

Anon - Says you. I love how conservatives are so ready to equivocate about the bible when it doesn't fit their prejudices.

Did antebellum Southerners love their slaves as themselves, I wonder? I know of course some owners knew their slaves (in the Biblical sense) but I mean in the overall scheme of slavery were they obeying Leviticus? Anyway, I thought the only verse conservatives knew about from Leviticus is the one about how a man lying with a man is an abomination....

Not says me. Says history.

I would suspect that slave owners may have cared more for their slaves than did the fellow tribesmen of the slaves that captured and sold them into slavery, if merely to protect their investment. Again history..

Not every slave came directly from Africa, though. Many were born and lived their entire lives in slavery in the South. Are you actually defending slave owners?

Seems that Foxx's little law making it a crime to help undocumented people would be in direct conflict with the Emergency Medical Treatment and Active Labor Act (EMTALA).