Forget, for the Moment, What McCrory Has Done to Education; Look What He's Done to Science 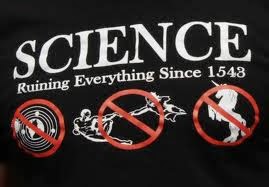 North Carolina is bleeding teaching talent as though someone slashed our educational jugular (which in fact the General Assembly did, assisted by Gov. Squishy), but just as alarming is the full-out assault on our scientific community detailed in this WRAL report.

Did you know that the Gen'l Assembly, at McCrory's behest, moved over 1,000 NC civil service employees into "at will" situations, meaning that the governor can fire them without cause and on a whim, and one of the whims actually written into the law is "loyalty to the governor." Not making this up. One of the workers moved to "at the whim of the governor" status was the top scientist at the Nature Research Center in Raleigh.

But first, the governor's new stooge Science Museum Director Emlyn Koster demoted that top scientist, just as a hint that her scientific research was no longer needed in North Carolina. That scientist has understandably taken another job in California.

The logo of the McCrory administration ought to be a bleeding wrist.

The other sure sign of the esteem with which McCrory views science is the other decision by that stooge Science Museum Director Emlyn Koster, to cancel a film-showing about sea-level rise, because as we all should know by now, our generous Republican dictatorship has decreed that sea-level rise does not exist.

The only good thing we can say about the reclassification of hundreds of North Carolina's civil service employees to "at will" employees is that the next Democratic governor can fire the ideological idiots at the get-go.

Posted by J.W. Williamson at 11/19/2013 10:12:00 AM
Email ThisBlogThis!Share to TwitterShare to FacebookShare to Pinterest
Labels: Pat McCrory, Republican brand