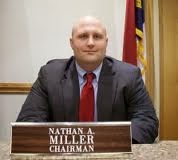 Town of Boone officials and Watauga County Commissioners met last night over the process for making Extra Territorial Jurisdiction (ETJ) appointments to Boone's boards and commissions, as required by law. Jesse Wood's coverage in the High Country Press is thorough and detailed.

County Commission Chair Nathan Miller's extreme Tea Party philosophy was on full display. He does not believe in any land-use planning regulations. He made that abundantly clear.

Bottomline: It doesn't matter which ETJ residents the Town of Boone recommends for its Planning Commission and its Board of Adjustment. The three Republicans on the County Commission are going to reject those recommendations and appoint people hostile to Boone's development regulations. Always.

Perry Yates, who often doesn't seem to realize what he's revealing about himself when he speaks, said it was "discrimination" that the county might have to jump through an extra hoop (a public hearing) in order to appoint men to Boone's Board of Adjustment who disagree with the town's development ordinances. Discrimination.

Think about that for one minute. Appointees to the Board of Adjustment are sworn in as quasi-judicial officials. They serve as judges, and the law they interpret and apply is Boone's Unified Development Ordinance. In effect, Perry Yates was saying he wanted to appoint judges who not only won't uphold the law but who despise the law.

Let's call this what it is: nullification, the highly popular theory and attempted practice among Tea Party types everywhere. Nullification is the philosophical viewpoint that if you don't like a law, then by Gawd you don't have to follow it.

Nathan Miller, Perry Yates, David Blust, and the entire Templeton clan lost the recent election, in which they attempted to install nullifiers into office in Boone. What is left to them in their toolkit of nullification is their ability to screw with the law by appointing judges who don't believe in the law.

This ain't new. The current crisis of "communication" between town and county was precipitated in April 2011 when the town of Boone forwarded recommendations to the County for appointment to the Planning Commission and the Board of Adjustment. One of those recommended ETJ residents had previous experience on a planning board, a zoning board, and a board of adjustment. Another had work experience in rural and urban development. A third, a nationally noted environmentalist living in the ETJ, was explicitly rejected by Commissioner Nathan Miller because "he agrees with the town's planning ordinances."

In that famous April meeting, the County Commission (with Commissioner Jim Deal voting no) rejected the town's qualified recommendations and appointed two men who had not even applied and another man who lived in the town of Boone and not in the ETJ.

Yet it is Nathan Miller who can always work himself up into a ziggurut of wounded self-righteousness in his approach to the town of Boone. And, ironically, this is the Man Who Would Be District Attorney, if he can get the people of this judicial district to vote him into office next year.

Yeah, I want this man applying the law!

Miller is habitually unprepared for court now. Can you imagine how bad he will be as the chief law enforcement official in watauga county?