Our Shallow and Insincere Governor 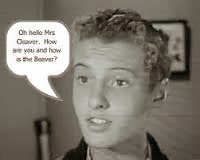 Pat McCrory opens his mouth (more than he should, obviously) and out come statements that launch a thousand editorials and blog posts. His brain (such as it is) appears to be disconnected from his mouth, or he simply lacks any filtering mechanism by which he might -- but doesn't -- measure his words for their ramifications.

He lies, because he wants everything to seem rosy: On Charlotte's WFAE this week, McCrory said that he and the new Republican majority in the NC General Assembly did not cut unemployment benefits. A whopper.

He mimics Orwellian "language management": "We didn’t shorten the early voting, we compacted the calendar.”

He is amazingly tone-deaf: About his famous cookie caper and the women outside his mansion protesting his abortion bill, he said, “I don’t care, I felt like doing it. Who cares?”

Meanwhile, Governor Eddie Haskell's minions are charging big bucks for public records requests, in violation of the spirit of our open government statute and as a clear attempt to make access to information more difficult.

His other minions in the Art Pope arm of his administration are meanwhile harassing a UNC-Chapel Hill law professor for daring to criticize The Guv.

Associating McCrory with Eddie Haskell may actually be giving him too much credit, since Eddie was too young to know how transparent he was. McCrory is old enough to know better.

Nothing can penetrate the bubble where Pat lives in Alternate Realityville. It's all good there!