Watauga County Commissioners Try To Bully the School Board 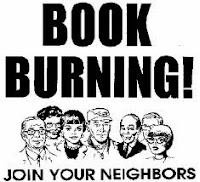 The joint meeting between the Watauga County Commission and the Watauga County School Board, to discuss future budget projections, was “derailed,” according to the Watauga Democrat, when the three Republicans on the commission decided to grandstand about how outraged they were that “despicable filth” in the form of a world-renown novel was being taught in a high school English class. Another witness described what happened as an “ambush.”

Ah. It’s always a bright and lovely day when political hacks become literary critics, not to mention blue-nosed censors of what other people read but what they themselves have not and will never actually read.

Oh I know that Commissioner David Blust claimed that he had read “parts, not just excerpts” of Isabel Allende’s The House of the Spirits, as though there were some self-justifying distinction to be made between “parts” and “excerpts.” I think it’s likely that he read “the good parts,” as that phrase would be understood by a smutty-minded teenager. I never read Lady Chatterley’s Lover, but I knew “the good parts” almost by heart when I was 15 years old. Which begs the question ... how old emotionally is David Blust?

Nathan Miller is no stranger to bullying, and he has not in the recent past hesitated in extending his power to the Department of Social Services board, so it was wholly characteristic of him to demand that the School Board scuttle its own process for reviewing the charges against teaching The House of the Spirits and simply declare the book an “egregious violation” of all that is holy and decent.

We know what’s going on here. Commissioner Yates (who declared himself a HUGE Christian at the meeting) just stood by and watched as his wife led the Republican Party into a disastrous ass-whupping in the recent municipal elections, and the Republican majority on the commission are behind the eight-ball with their own Party members over the way that County Attorney Stacy C. Eggers IV (“Four”) has manipulated the Board of Elections for attempted partisan advantage.

So what do you do as a Republican majority to overcome this bad hoodoo? You change the subject radically and try to stir up the worst emotions you can in your base. “Look, people, we’re protecting your kiddies from filthy literature, so put us back in control of the county in next fall’s general election!” In the process, they appear to the idle observer as "rude and arrogant." To the informed observer, they acted like "swine."

What we see are cynical opportunists willing to use their religion to divide and conquer. Which means they need to be out of power, not installed into more of it.

the BOC has no place weighing in as officials on this matter from their bully pulpit, holding sermon over the BOE and derailing their budget discussions. Their grandstanding only reveals their ignorance of this excellent book, a top notch teacher, and a top quality education at WHS. Shame.

They are using this type of grandstanding because, frankly, they've got nothing else to run on.

Oh how I wish people were brighter and wiser and not buy into these shenanigans anymore !!!

Those 3 yahoos belong to the party that just hates "government interference." So what do they think they are doing? Mind your own damned business.

This discussion makes our County Commissioners look incredibly ignorant and small-minded. Kennedy was the only one with enough sense to remain silent on an issue that wasn't within their purview in the first place.

New to this area. What on earth did the Democrats do that allowed these extreme right-wing fanatics to get this kind of power? These commissioners are ignorant, like their party, but somehow, someway, they've appealed to the voters.

Was this Anne Marie's idea to make censorship the new banner for the Watauga Republican Party? I see the local Republican Watauga Commissioners Perry Yates, David Blust and Nathan Miller quickly took up her causes without thinking about the rights or education value of great teachers in our community. Republicans supporting these Teahadist must really hate Democrats.

If they allow the parents who oppose the book to "win" this debate, who will protect the rights of the parents of the other students in the class?

Anon 7:35 said "New to this area. What on earth did the Democrats do that allowed these extreme right-wing fanatics to get this kind of power? These commissioners are ignorant, like their party, but somehow, someway, they've appealed to the voters."

This is the unfortunate consequence of very low voter turnout in the 2010 election (which also allowed Republicans to gain control of the state legislature and then draw up districts that favored them). In 2012 turnout was higher and we elected 2 Democrats, though Republicans held on to the majority in part because Miller and Blust were not up for reelection. The big lesson here is that every vote matters and 2014 needs to see real turnout so that we can vote these guys out. Miller in particular has been an embarrassment in so many ways, and a real impediment to compromise with the town of Boone. Voting him out will be a huge gain for the citizen of this county.