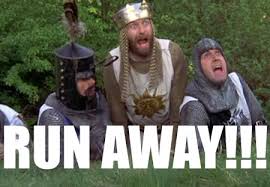 Republican members of the Watauga County Board of Elections, Luke Eggers and Bill Aceto, have caved on the creation of a "mega-precinct" out of Boone 1, Boone 2, and Boone 3 precincts, just passed by them in a 2-1 vote on August 12th, a day that will live in memory.

In a resolution written by county attorney Stacy Eggers IV ("Four"), and distributed this time by Bill Aceto to the press (gone, apparently, are the days when such resolutions were kept secret from the public, the press, and the Democratic member of the BOE), the Republicans made room for whining about "misinformation being disseminated," though what misinformation has been disseminated is not specified, and I rather thought that we were all perfectly clear on the what, when, how, and why the Republicans were trying to discourage ASU students from voting:


...Whereas, on Monday, August 12, 2013, the Watauga County Board of Elections voted to re-combine the Boone precincts due to the small geographic area of the precincts, the presence of early voting within the precinct, and the historically low voter turnout for the precincts; and

Whereas, this action has resulted in a great deal of misinformation being disseminated regarding the eligibility and ability of individuals to vote at the Boone precinct; and

Whereas, the Watauga County Board of Elections encourages all eligible voters to exercise the right to participate in the election process; and

Whereas, the Watauga County Board of Elections is concerned that the misinformation being distributed regarding this recombination of this precinct will result in voter confusion; and....

The resolution to prematurely withdraw the mega-precinct, to be voted on at the Watauga BOE meeting this Wednesday morning, Sept. 4, at 9 a.m. (we assume it's 9; the agenda doesn't actually give a time), has nothing to do with their Early Voting Plan, which eliminates Early Voting altogether on the ASU campus. That particular change will be decided in Raleigh this coming Tuesday, Sept. 3, at 1 p.m., following a hearing before the State Board of Elections in which Kathleen Campbell will present her rival plan for Early Voting, one that includes an Early Voting site on the ASU campus.

The sudden withdrawal of the mega-precinct resolution (excerpted above), along with a second resolution written by Four Eggers to relocate Boone 2 from the Student Union to the windowless Legends nightclub, will allow voting on campus for one day on November 5 for one precinct and in one location. Boone 1 and Boone 3 will vote at their usual locations.

Over in Right Blogistan, the Watauga Conservative is experiencing dyspepsia over this sudden surrender, with some posters there complaining that Republicans have retreated and others saying, "Then speak up and tell them so at the meeting on Wednesday," and someone else pointing out that speaking up at a BOE meeting is now impossible, because the Republican members have eliminated public comment except via words on paper submitted in advance.

Turns out that there are myriad ways to get bitten in the ass.

I would be interested in knowing what time the Wednesday meeting is because I would like to start attending ALL of the BOE meetings. At the August 12th BOE meeting, I believe they voted on having the meetings at 5:00 p.m. on the first Wednesday of the month.

How can we get access to the conservative blog?

Yes, the meeting will be at 5 p.m. on Wednesday in the Board of Elections.

How can we get access to the conservative blog?

There is a link to that blog on WataugaWatch. It's called "A Watauga Conservative" and the link is http://wataugarepubs.blogspot.com/