Face-Palm or Giggles: Seven Pieces of Debris for a Saturday 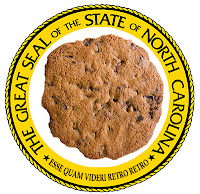 Fluffing himself up. Why would Phil Berger spend that kind of money on that kind of TV ad unless he was planning to rough up Thom Tillis in a Republican senatorial primary? Inquiring minds want to know.

"DHHS is an example of cronyism gone wild." The NC state agency named for "Health & Human Services" may soon be changing its name to "High and Unjustified Salaries." A couple of weeks ago, the issue was 20-somethings who used to work for McCrory's campaign getting jobs in DHHS in the $80 thousand range. Now it's the 20-somethings who make over $80,000 defending a crony of the husband of the department's head making over $220,000 for eight months of "consultation."

Tip of the iceberg? Those high salaries being paid cronies of the ruling elite at DHHS don't even account for other sweetheart contracts being issued there, for example, to washed-up politicos like Les Merritt, whose name seems remarkably apt in this context.

When You're In a Bubble, Everyone Looks Like a Bubble-Popper. The Guv is still being followed everywhere by protesters who don't like his policies and are beginning to really detest him personally, and under those circumstances it was bound to happen that a news reporter would get kicked off the premises where The Guv was grippin' and grinnin' at a private function designed to fluff his image.

The Guv's Flack Uses a Fake Name. No Kidding. According to Greg Flynn, "With all the fuss by Pat McCrory about Voter ID you'd think that matching real names to real people was a major priority of his, yet Kim Genardo is not the real name of his Communications Director. It's a stage name based on her mother's maiden name. It's not the name she is registered to vote under. It's not the name she uses to register her vehicle or pay her property taxes. It's not the name on her government paycheck. Now, I understand why TV personalities use stage names for privacy, but shouldn't the Communications Director for the Governor of NC use a real name?" Stuff like this helps account for the uncontrollable giggles I'm prone to this week.

"Always Low Wages, Always." We won't be satisfied until every Walmart in the country has a flash mob like this one in Raleigh.