Inside the Watauga GOP

The local Republican Party held an event last night at the Fairway Cafe on the Boone golf course, and Jimmy Hodges stood up and said he was changing his party affiliation and will run for County Commissioner in 2014 from Nathan Miller's Meat Camp district.

Jimmy Hodges was a registered Democrat when he sat on the County Commission from 1996-2004. He retired from the real estate business in 2009.

Our snitch said that all three Republican Boone Town Council candidates -- Mark Templeton, Matt Long, and James Milner -- were there, and they spoke. Candidate for Boone Mayor John Mena was not there, even though he's been publicly endorsed by the party chair Anne Marie Yates. County Commissioner David Blust announced that he will be running for reelection in 2014. Current County Commission Chair Nathan Miller spoke about his candidacy for District Attorney. According to my source, "He trashed the local DA's office." Britt Springer, a Republican member of that office and also a candidate for DA, was there, and at first party chair Anne Marie Yates was not going to allow her to speak, but Springer insisted. Snitch sez, "Springer knocked it out of the park."

No word on how many ASU College Republicans made it out to the golf course, but the local party was offering free tickets to any member of that club who wrote an email to the State Board of Elections supporting the selection of Legends nightclub for the Boone 2 polling place. Caroline Hartman is the president of the ASU College Republicans, and she's a good soldier: 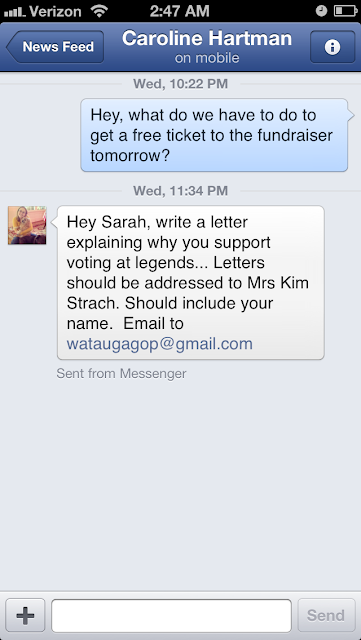 Meanwhile, Republican insurgents are calling for the removal of Anne Marie Yates from her position as chair of the local party and spilling certain beans about a now notorious August 29 meeting (about which we had already heard from party insurgent and perennial pariah, Deborah Greene).

By the way, the photo of Pam and I made it on the meeting door at the Golden Coral without the caption, "These 2 rarely if ever agree on any issue." LOL

I wonder if the Mr. Garluski will be next. I saw him talking with Mr. Wallen in the lobby at the same meeting. Mr. Wallen and Mr. Garluski both were opposed to the 194 biz park. Well, that comes with consequences, associating with Democrats and going against Boss Hog, Nathan Miller! LOL

I wrote a letter in support of Legends before they even chose Legends. Nobody offered me a free ticket much less an invitation.

Thanks for providing the link to HC News. I found that very interesting. This moderate Republican who has as many (or more) Democrat close friends would love to see Ms. Yates out of that role. There is no doubt in my mind that Ms. Yates is a the root of the Board of Election issues. If I were to run for office, I could not see her supporting me because I would tend to vote across party lines, seeing the whole picture.

Your "snitch" is a very poor relayer of the facts because the ultimate intent is to distort the truth.

Nathan Miller said no such thing about Britt Springer. He neither mentioned her by name or referred to her.

You are all too anxious to diss Nathan Miller that the facts are an inconvenient truth.

As for Anne Marie Yates not allowing Springer to speak, that is completely incorrect. There was a candidate sign-in sheet at the check-in table and Springer failed to sign-in as a candidate thus no one knew who she was. It was an honest mistake.

I suppose you feel that the only way to "convince or sway" people to your side is to lie and misrepresent the facts.

In your eyes the truth will get your nowhere.

Ummm, Anon 4:36, the blogpost doesn't say anything about Nathan Miller saying anything about Springer. It says he 'dissed the D.A.'s OFFICE'. This is called a paper tiger, I believe. You state something incorrectly, and then attack it as untrue. Hmmmmm.

Please tell your snitch that we Republicans are thankful for his $25.00 contribution to our cause. We will use it to defeat your candidates again in 2014.

Which political activist a few years ago remarked "I wish the County would buy up every available tract of land in the county."? Of course, this statement was made when the Democrat Party was in control of the BOC. Now that the Repubs have control, I guess it's politically correct to oppose such purchases. Huh?

Yes, people who go to open meetings and comment on what they observe are "snitches".