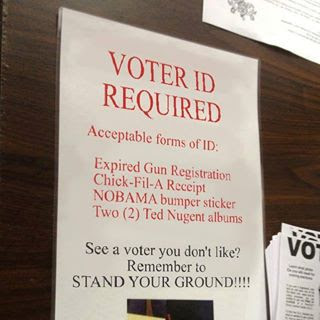 You know, I'd love for conservatives to just answer one simple question: if voter fraud is so rampant, and Democrats are cheating themselves into office, then how in the world did the Republicans manage to take control of the legislature and the governor's mansion? Their claims have been debunked by reality itself, yet still we hear this BS!

As I recall, Republicans ran on this issue in both 2010 and 2012 - the public wants Voter ID - heck, most folks thought/think an ID is required to vote prior to this law being passed.

Are you planning on showing your ID to enroll in Obama Care?

Is this "BS" you speak of similar to the "phony scandals" our President refers to?

Nice job trying to distract, Anonymous. I didn't say a thing about Obamacare or any of your "scandals." The fact remains: if there's so much voter fraud, then how do Republicans keep getting elected? It's a non-issue. I have a photo ID, so it won't affect me. How does eliminating straight-party voting or refusing to pre-register 17-year-olds relate to photo ID? Most of the things in the "Voter ID" bill had nothing to do with voter ID and everything to do with making it more difficult to vote.