The Assault on NC Cities Continues 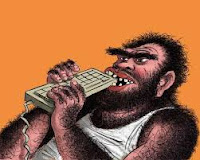 Senate Bill 112 (let's call it "The Up Yours, Cities and Workers" Act, since the title put on it by its Republican sponsors is a complete lie) is only the latest assault on the ability of cities to protect their residents from mega-development. This law will cripple local control in the following ways:

1. Billboard companies would be able to replace completely, or "update," their signs even in areas where a city has banned them. In other words, billboards may visually pollute in perpetuity. Just because the citizens of a North Carolina city want to limit such things means nothing to these big government conservatives.

2. Protest petitions, used by neighbors to a proposed development to slow down changes to their neighborhood, will be eliminated from zoning laws. Protest petitions have been standard practice in North Carolina cities since the 1920s. Under that law, if a high percentage of near neighbors to a proposed development sign a petition, their collective action forces a city council to muster a "super-majority" of votes to approve the rezoning. But under Senate Bill 112, developers will have a much easier time pushing through their plans, whatever they may be.

3. Senate Bill 112 will also make hearing officers for the Industrial Commission, men and women who decide whether a company is at fault when a worker is injured, subject to political hiring and firing. Currently, those hearing officers, who sit as judges and should be free of political pressure, are protected by the state's Personnel Act. But this Republican wrecking crew wants them "fireable" at will, especially when one of them rules against a big company that happens to be feeding the campaign coffers.

This piece of vandalism cleared the NC House yesterday and goes back to the Senate.

Can you cite where in the bill you're drawing these from? Trying to find them, and assuming it is Bill 112 - 6th edition that passed, well...its quite long and I'm having trouble parsing out where these might be.