Of Course They Did

The Republicans in the NC Senate, not to be outdone by the troglodytes of Texas and Ohio and not to be out-shone by Todd "Legitimate Rape" Akin, have suddenly sprung upon the women of North Carolina some sweeping new anti-abortion laws and tacked them all onto a bill about prohibiting Sharia law, which is funny, because nothing comes closer to the spirit of the Taliban than this latest expression of "we don't trust women to make their own decisions."

The new prohibitions would...

a. allow any health care provider, not just doctors and nurses, to opt out of providing abortion-related services.

b. prohibit health plans offered on the federal health care exchanges from offering abortion coverage. It would also prohibit state funds from being used for abortions, except to save the life of the mother in case of rape or incest. It would also prohibit city and county health plans from offering abortion coverage more extensive than the coverage offered to state employees. The state health plan does not cover abortions except in cases of rape or incest or to save the life of the mother.

c. prohibit doctors from performing an abortion if they know the woman seeking it is doing so because of the gender of the baby (yeah, let's introduce a little adversarial nose-poking into the relationship between a woman and her doctor!)

d. require doctors to remain in the room for the entire abortion procedure, whether surgical or medical / chemical, thus limiting the number of abortions that a single doctor could perform.

Apparently, Moral Mondays aren't nearly enough for the senators. They want a spectacle similar to the ones unfolding in Austin. We sincerely hope they get it. 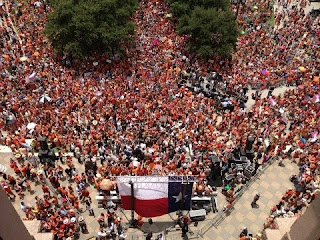