Is the NC Senate Trying To Drive a Stake Through Thom Tillis? 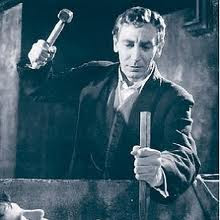 The unannounced appearance of major anti-abortion legislation in the NC Senate, tacked on to a NC House law prohibiting Sharia law, and done so on the eve of a national holiday when Thom Tillis's House is out of town sipping beverages and relaxing, gives one pause to reflect.

Does Senate President Doug Berger hate Thom Tillis, or what?

And, Tillis, bless his heart, is trying to run as some sort of mythical North Carolina Republican moderate for the U.S. Senate, against a female senator, no less, who just might decide to rally the women of the state against what can be billed as "Mr. Tillis's abortion law," if he decides to go along with the Senate.

Tillis is on the spot with this. So's Squishy McCrory, who said back during the campaign of 2012 that he would not sign any further restrictions on abortion in North Carolina. Of course, he will, should it get to his desk, but the real question today is What Will Tillis Do?