Buried way down in a Wilson Times interview with Gov. McCrory during his recent visit to that city is this baldfaced whopper:


McCrory said he has come out to hear what protesters are not happy about on the Moral Monday protests.

"I go out in the crowd all of the time,” McCrory said. "Frankly, yesterday I went out and talked to several of them and they were not very respectful. They did not represent the majority of those who call themselves moral by cussing me out. But that’s the way things go some times.”

Keep in mind that it wouldn't have been just Gov. Squishy by himself in that crowd, because wherever he goes, he has his handlers and his flacks and his groomers and his simultaneous translators and his fluffers. Yet no one in the Moral Monday protests, nor anyone in the platoons of news people there, ever saw his sorry ass once, let alone repeatedly? 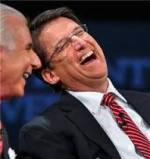 Could it have been because he really is an empty suit?

Well, maybe he was wearing Groucho glasses and carrying a pro-choice sign or something...nah, too chancy, someone might recognize him despite the disguise and there would be h*ll to pay with Pope and the boys. He was not there. Hope the Wilson reporter called him out, but not likely.

I can't believe he would be this stupid... this kind of thing is pretty easily verified (or debunked). Has anyone seen him out among the protestors? Surely if he were, there would be a photographer there to capture the moment. Cussing out the governor is a big deal; someone surely would have reported on that!

Quicker solution -- he's the governor. Find out where he actually *was*