“Reclaim Carolina: Because One Mississippi Is Enough!” 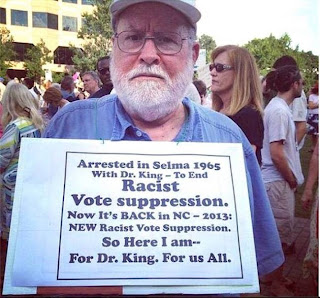 That slogan above for 2014 has been suggested by Chuck Fager, one of the arrestees at Moral Monday on July 22. (I added the exclamation point to express my own sense of urgency.) That's Chuck in the picture to the left on Halifax Mall last Monday.

Chuck Fager's activism for voters' rights goes back almost 50 years to his two arrests in Selma, Alabama, while he was marching with Dr. King for civil rights.

There are many more like Chuck in North Carolina. One of those many more is "Micah," whose Progressive Redneck Preacher blog I just discovered (thanks to Brother Doc!). That's where I got the story of Chuck Fager.

I'm thankful for them both and for the almost-1,000 fellow citizens who have been arrested in Raleigh for expressing their dissatisfaction with the power elite now trying to destroy this state.