Nathan Miller Plays the Grinch, and Perry Yates Gets Lost in the Weeds 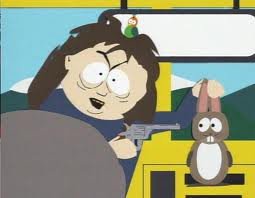 The Republican three-man majority on the Watauga County Commission voted tonight to dissolve the board of the Department of Social Services (DSS) and to seize the power for themselves of hiring and firing the DSS director, just ahead of current director Jim Atkinson’s planned retirement early in 2014.

Nathan Miller gets his way ... again.

Meanwhile, fellow Republican Perry Yates got wrapped around the axle of his own visible desire to appear moderate. He wanted to change Mr. Miller’s motion to allow the current Board of Directors of DSS to remain in place as a board that “continues to run DSS,” even after Mr. Miller pointed out to him that the DSS Board does not run the department. Their only duty is the hiring and firing of the director. So Yates ended up voting for Mr. Miller’s bare-knuckles takeover of the department while continuing to express vague longings that the current board – all wonderful people, to be sure, cooed Mr. Yates – be kept on in some undefined and totally unstatutory “advisory” capacity.

Perhaps they could come in once a week and water the houseplants.

No one spoke at the public hearing in favor of Mr. Miller’s resolution. No one. Several spoke eloquently and knowledgeably about how the DSS Board has functioned without politics and independently for at least 40 years. Mr. Miller’s resolution, by placing the County Commish in the driver’s seat, inevitably injects politics into the investigation of child abuse and a host of other societal ills.

One speaker against Mr. Miller’s resolution, who described herself as a Christian, a licensed social worker, and a Republican, said, “I hope you don’t do this thing .... This opens the door for corruption .... What if DSS needs to investigate a family member of a county commissioner down the road? ... This opens up all sorts of ethical and legal issues for the continued independence of the department.”

Another speaker asked, “Why has this even come up ... sticking your hand into a department run by professionals?”

Chairman Miller, visibly feeling the heat and noticeably more combative because of it, answered, I’m the one that asked for this. I serve as a county commissioner on the DSS board. This has nothing to do with staff or the current director. This is a county department. We don’t have separate boards for other county agencies that hire and fire directors of those agencies or departments. We [county commission] can’t hire or fire the director, and if you as citizens have complaints against the director, we can’t do anything about it. But as county commissioners, you can fire us in the next election. My motion is for future problems that might arise. Our elected board of commissioners should answer to the people and take the future heat for any director of DSS.

Current DSS Director Jim Atkinson replied that the county commission already has total – complete – control over the department’s budget. “What more do you want?”

Commissioner John Welch, one of the two Democrats on the commission, asked rhetorically, “How many directors of DSS have we had in the last 40 years? Two. Who selected them? The board of DSS. Mr. Miller has made reference to the problems that arose when another board – the School Board – chose a Superintendent who later had to be fired. Who chose that Superintendent? I’ll tell you. It was five elected officials.” At which the crowd in the commissioner’s boardroom erupted in laughter and applause. The laughter was at Chairman Miller's expense. The applause was all for John Welch. Meanwhile, the pen that Chairman Miller was holding, had it been a small animal, would have died at that moment from his white-knuckled grip.

Mr. Miller is a man who likes power and intends to have it.

The vote was 3-2, and the DSS Board is dissolved. We’re sure those knowledgeable and dedicated people will all want to hang around while Mr. County Attorney tries to draft some language for what an “advisory board” with zero power might do while Mr. Miller steers the department his own way.

The Welch family did themselves proud last night. Mrs. Welch spoke eloquently in praise of non-profits, which our Republican commissioners want to defund, and Mr Welch certainly skewered Mr Miller with his comment.

I am always amazed at the extreme damage a few power hungry people can do when the rest of us sit by and let them.