Is Nathan Miller Legally Serving on the County Commission? 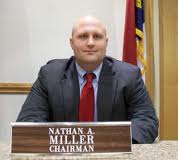 Watauga County Commission Chair Nathan Miller no longer resides in the commissioner district from which he ran in 2010 – District 5, which includes the precincts of Elk, Stony Fork, Meat Camp, Bald Mountain, and North Fork.

The current district-based composition of the Watauga County Commission was passed in a public referendum on March 22, 1975, a vote which also increased the size of the commission from three to five members.

The resolution passed by the sitting commissioners at the time of that vote included this proviso:


...that the structure of the Board of County Commissioners be altered as follows: ... (4) that the county be divided into five districts with the members residing in and representing the districts according to the following appointment plan [5 commissioner districts divided by precincts]....

The actual ballot referendum language that citizens voted “yes” or “no” on included this sentence: “Members of the board shall reside in and represent the districts according to the ... appointment plan....”

Stacy Eggers IV (“Four”) told the County Board of Elections, which he sits on as the Republican member, that the language of the statute applies only to the moment that the commissioner is elected. How Mr. Eggers, who also serves Chair Nathan Miller as county attorney, gets to that interpretation, from language that says explicitly “shall reside in,” may have something to do with both his partisan interests as well as his paycheck.

I don’t see any room for interpretation there. It’s what the voters voted for in March 1975. It’s not what the voters are getting, especially the residents of District 5.

Well, if its a problem, he can rent a room in the district and stay there once a year while claiming residency. if Hilary can do that to be a senator, then it must be legal. If htte room was in a dorm for ASU, then certainly there would be no problem.

Maybe they can just draw a circle around his house and move it into District 5.

You know, JW...The same way they went 2 miles outside of Boone town limits to draw a circle around YOUR house and make Pam eligible for the various town boards.

So according to Eggers, if he currently lived in TN or Ashe county, that would be okay, because it only matters where he lived when elected?

I have not opined recently on either the Watch or the Conservative. However, this is a question, I have been asked by a lot of people, mostly those living in District 5, the district Nathan Miller did reside in. Nathan began to tell people he had moved which resulted in people asking the question and rightfully so. I decided to investigate. This is what I concluded after my investigation.

There are 2 questions to be answered when a county commissioner moves out of his district.

“The following person shall be disqualified for office:
First, any person who shall deny the being of Almighty God.
Second, with respect to any office that is filled by election by the people, any person who is not qualified to vote in an election for that office.
Third, any person who has been adjudged guilty of treason or any other felony against this State or the United States, or any person who had been adjudged guilty of a felony in another state that also would be a felony if it had been committed in this State, or any person who has been adjudges guilty of corruptions or malpractice in any office, or any person who had been removed by impeachment from any office, and who had not been restored to the rights of citizenship in the manner prescribed.”
The “second” provision is the issue in question. Is Nathan Miller eligible to vote, if there were an election held while he resides at his new location, in an election for the office which he holds currently? The answer to that question is, “yes”. According to Watauga County Ordinance VIII, the county is divided into 5 districts and candidates from each district are allowed to run for a seat representing that district on the Board of Commissioners. And, the all qualified voters of the county (regardless of the district they live in) are qualified to vote for the candidates running in all five districts. Nathan Miller still lives in the county so he is not disqualified according to the NC State Constitution.

(4) That the county be divided into five districts with the members residing in and representing the districts according to the following apportionment plan, but the qualified voters of the entire county shall nominate all candidates for and elect all members of the board with the highest vote getter from each district being elected to the board;

The resolution was passed on January 10, 1975, according to the minutes of the Watauga County Commissioners. A voter referendum was held on March 22, 1975 (I was getting a degree in Mathematics instead of law at the University of South Florida). According to the “Abstract of Votes”: ”We, the undersigned, the County Board of Elections for said County, having opened, canvassed and judicially determined the original returns of the Special Election in several precincts in this County, held as above stated, do hereby certify that the above is a true abstract thereof and contains the number of legal ballots cast in each precinct FOR and AGAINST the Proposition to Alter the Structure of the Board of County Commissioners, as returned to the County Board by the Registrars. Given under our hands, this 24th day of March, 1975.
2,119 FOR 1,855 AGAINST”
According to JW’s post above, Stacy Eggers IV told the Board of Elections, “that the language of the statue applies only to the moment that the commissioner is elected”. As discussed, this is a question for the County Attorney, Stacy Egger IV and not Board of Elections member Stacy Eggers IV. Not being at the meeting, I don’t know which hat he was wearing. With regard to the local ordinance above, it is clear to me that there is a distinct difference in candidate (running for membership on the Board of Commissioners) and member (elected, residing in and representing the district, and serving a term on the Board of Commissioners). The local ordinance (statute?) spells out not only what happens at the moment one is elected; it lays out the structure of the Board of Commissioners. According to the ordinance, the structure requires 5 districts with “members residing in and representing the districts as set forth in the apportionment plan above”. Ludicrous to say that this statute only applies at the “moment one is elected” because one is a member from the time elected until he no longer qualifies under the ordinance. Do two-year and four-year terms only apply at the “moment one is elected”? Is he saying that someone could live in District 1 up until the date he/she is elected and then move to District 2 one moment after elected? Ludicrous.
And, this is not a political question, this is a legal question. The answer will not only affect Republican Nathan Miller’s membership designation, it will affect all current and future members (Republican, Democrat, Unaffiliated, et al) who might move out of their district while serving their term.

If you are interested in more information, go to "Residency Changes by Elected Officials" by Robert Joyce, NC Institute of Government at:

I am not a lawyer. I am an activist for good government, government by the people and for the people.

So, Debora. When Miller does finish his term, will you run as a Democrat? A Republican? Or an Independent?

Or maybe something else entirely?

I doubt that I will run because if I ran for commissioner I would have to run affiliated. I would have to then run Republican. And, I would never get the blessing of the local GOP. I make a better activist.

What is the legal definition of residence? The first two posts have a point. If Miller has a house under construction that he is going to live in, does that qualify as his residence. It would seem to be more ties to the district than a dorm room but students are residents.

I know people that lived in their basement for three years before the entire house was finished. At what point can he claim it as a residence, whether he actually lives there or not?

I see little difference in this and the Boone attorney being part of the decision making process and then advising the Council and BOA how to conduct business.

The Board of Elections would have a say if Miller was running for reelection and didn't live in his district. They don't have authority to remove people from office.

Funny how none of this came up when it was Democrats that were living outside their districts!

"“The following person shall be disqualified for office:
First, any person who shall deny the being of Almighty God."

You made the front page of the Democrat J.W. Guess you hit a nerve or something.