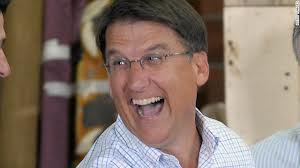 Gov. Squishy talked about the massive protests that have been building at the General Assembly building in Raleigh, especially on what's being called "Moral Mondays," where people are voluntarily being arrested to express their civil disobedience to the regime now in power and its attempts to suppress voter rights, end public education, throw out environmental protections, and seize power from the state's municipalities (among other baleful measures).

This is what the Governor said to WSOC-TV:


"They [the protesters] want to keep the status quo. I am not in favor of keeping the status quo. We have got to fix broken operations in the state government, and in order to do that, I am stepping on the toes of the right, the left, the middle."

Let's break that down a little. "They want to keep the status quo" ... well, yes, in a way, if we understand status quo to mean free and easy ballot-access for the poor, people of color, the homeless, college students -- all the voters who've shown little affection for the Republican schemes to drive us all back to 1920.

Status quo ... a vibrant and fully functioning public education system that isn't privatized for the benefit of a few corporations or shit-canned by laying off teacher assistants and by increasing class sizes to cattle-pen status.

Status quo ... protections for the state's air and water and natural resources and not easy whoring after fracked gas and the unleashing of polluters.

Status quo ... local city governments making decisions about growth and development according to their own lights and in accordance with their own voters' wishes, not having their resources seized with no compensation, yes THAT status quo.

The Guv sez, "I am stepping on the toes of the right, the left, the middle." Who exactly is he trying to kid? He's terrified of THE RIGHT, he gives not a rusty fig for the left, and he's strayed so far from the middle that he couldn't find his own ass with both hands and a head start.

Don't know what crack pipe this grinning idiot has been sucking on, but it must be some pretty powerful rock.