The Three Amigos Got an Earful ... If They Were Listening 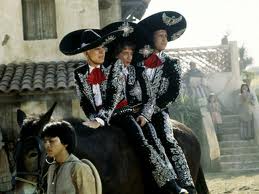 Some 30 citizens signed up tonight to speak at the public hearing on the new proposed county budget, and very few of them – well, none – said that they think the Republican majority has been fair to, respectful of, or even vaguely knowledgeable about the work of non-profits in the county.

During budget negotiations, which I attended with excruciating pain to my backside, Commission Chair Nathan Miller made it abundantly clear, and repeatedly, that he’d like to zero out all grants for non-profits, which actually accounts for pathetic crumbs anyway in the scheme of things.

But you could not sit in that hearing tonight without gaining new respect for this larger community, which is full to overflowing with “highly qualified, highly motivated people doing essential work for the people of this county” (as one speaker expressed it), and doing it all for next to no money, although with great expertise and commendable dedication, and with clearly little to no respect from our Republican elected officials.

Watauga County citizens as a whole get an incredible bargain in what our hard-working and underrated non-profits provide, from the services of community parks or the efforts at the Western Watauga Youth Network for keeping at risk teenagers “out of the system” or the benefits to everyone when our homeless are provided some food and a roof at the Hospitality House. The list went on.

Mountain Alliance, the only agency that concentrates on keeping high school students from dropping out, had its budget request cut almost in half. Several people spoke movingly, and from experience, about how that non-profit benefitted them personally and the county as a whole. Isn’t combatting the school dropout rate a social good? And who is performing that function other than dedicated and poorly compensated volunteers and professionals ... because the schools don’t have the resources and the commissioners obviously could care less?

Several speakers expressed surprise that with the windfall the county will now receive from the corrupt redistribution of sales tax revenues, and the concomitant kick-backs from the resort towns of Blowing Rock, Seven Devils, and Beech Mountain, the county has the money to help. They just don’t want to.

Meanwhile, and in defiance of the logic of that sales tax revenue redistribution, whereby the resort towns of Blowing Rock, Seven Devils, and Beech Mountain will suddenly be much richer, the Republicans on the County Commission decided to give those towns either their full budget requests for parks & rec, or very nearly their full requests, while slashing badly needed funding for Foscoe Grandfather Community Center, Valle Crucis Community Park, and especially Green Valley Community Park, which had its request for a measly $15,000 cut to an insulting $4,000. Makes no sense whatsoever!

The Hospitality House has been the most badly treated of all non-profits, getting precisely zero in funding for the last three budget cycles. One speaker said she was somewhat amazed that the County Commission is giving almost $80,000 to the Humane Society while giving $0.00 to our one homeless shelter. “You are providing funds for homeless animals,” she said. “We ask that you also provide funds for homeless people.”

I’m requesting permission to reprint several comments verbatim from tonight on this blog, and I hope to have the first of those tomorrow. Stay tuned.