Is Nathan Miller's Hatred of Gays Behind His Take-Over of DSS? 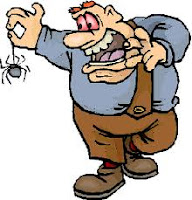 It apparently came as quite a shock to County Commission Chair Nathan Miller to learn that there are gay foster parents in Watauga County -- and have been for many years -- and there's some convincing persistence to the explanation that this feeling is behind his seizure of power to take the duties of the board of directors of the Department of Social Services for himself and thus put a stop to a program that actually works.

Evidently, under Mr. Miller's influence we can expect the new director of DSS to be hostile to gay foster parents. We're eagerly awaiting the evidence.

i dont think nathan's that smart to come up with this on his own...follow the trail...what other group of folks in the county are afraid of gay foster parents? though nathan "authored" the new design for dss, someone put a bug in his ear about the dangers of others foster parenting children. you see, personal freedoms and less gov't intrusion is ok as long as those personal freedoms aren't viewed as non mainstream.