When Was Foxx Elected To Represent Turkey? 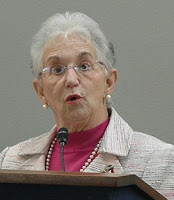 What's this infatuation Virginia Foxx has with the nation of Turkey? She reportedly takes $10,000 in Turkish PAC money and works to pass H.R.2362, which would have "singled out Turkey for preferential treatment to engage in economic development projects on tribal lands in the United States." The measure was defeated yesterday in the U.S. House.

She's made multiple trips to Turkey. She's a member of the Congressional Turkey Caucus (yes, there is such a thing). Just Google "Virginia Foxx" + Turkey.

Used to be, and of recent memory, when a politician got this deep into the weeds on behalf of a foreign nation, there might be a conservative somewhere screaming foul.

Posted by J.W. Williamson at 7/25/2012 11:02:00 AM
Email ThisBlogThis!Share to TwitterShare to FacebookShare to Pinterest
Labels: Virginia Foxx

It has something to do with her now-former son-in-law, who's Turkish. Perhaps he convinced her that the decades-long project by the Turks in the late 19th and early 20th centuries to exterminate the Armenians never happened, but documentable history is not on the side of the genocide-deniers. Now it's come out that the Turkish government has been behind the movement to claim that the Appalachian Melungeons are actually Turks: http://asbarez.com/104352/dna-study-busts-myth-that-one-million-appalachians-are-of-turkish-descent/

Can't help it, but Foxx and Turkey are a perfect match.

How about our new healthcare centers, is Foxx supporting them? Oops they are a part of 'Obamacare'

Where is our Bacon Madame Foxx?

Does anyone else besides me see the comedic possibilities in saying that Madam Foxx is in the "Congressional Turkey Caucus"?? You just can't make this stuff up!

Turkeys of a feather flock together!