This "Young Gun" Is Half-Cocked 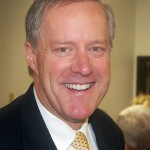 Meet Mark Meadows, the recent Republican survivor of the second primary for the 11th District Congressional seat, currently occupied by Rep. Heath Shuler (who isn't running for reelection). Within seconds of his win yesterday, the National Republican Congressional Committee sent out a press release declaring Mr. Meadows a totally awesome hunk of grade A Conservative Meat. In other words, a "Young Gun." It's almost as though they already had that press release written.

We are relieved to see, however, that Mr. Meadows is a confirmed birther and is highly suspicious of the United Nations taking over city planning and the perfidious fluoridation of our precious bodily fluids (probably). It's truly a relief that the Republicans in the 11th Congressional District know the difference between sane and crazy, and ALWAYS go for the crazy. Or the mealy-mouthed.