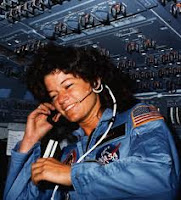 
“Today, America lost one of its greatest pioneers. The first American woman in space, Sally Ride inspired millions of Americans with her determination to break the mold of her time. She was a profile in courage, and while she will be missed, her accomplishments will never be forgotten.”


Footnote to Mr. Romney's rah-rah piety: Sally Ride’s partner of 27 years will be denied any federal benefits she might have gotten if they’d been an opposite-sex married couple.

Which led one blogger on LGBT issues to publish a "Memo to Mr. Romney":


If you don’t support our most fundamental relationships — if, in fact, you dedicate a significant amount of your political career to undermining those relationships, and make political hash out of marginalizing us and playing on people’s fears and hatred of us — you don’t get to speak about us with sentimental gushing after we’re dead.

Posted by J.W. Williamson at 7/24/2012 08:56:00 AM
Email ThisBlogThis!Share to TwitterShare to FacebookShare to Pinterest
Labels: gay marriage, homophobia, Mitt Romney

Immediately after the historic shuttle flight, Jane Pauley interviewed Sally Ride on NBC's Today Show. Sally was married at the time, and Jane could not help but ask, "Do you and your husband have any plans for children?" Without skipping a beat, Sally responded, "That's none of your business, Jane."

LGBT or whatever you call your support group... you are full of crap