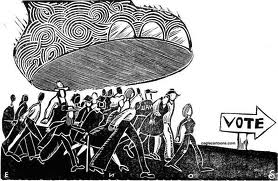 Since George W. Bush's salad days, at least, we've wondered where the myth came from that Republicans are good with money. What they're good at is shoving fiscal responsibilities off on other people. Like, fer instance, the responsibility of running elections.

Scott McLeod in the Smoky Mountain News has noticed that the Republicans in the NC General Assembly simply shifted expenses onto the counties when they refused to take Federal Help America Vote (HAVA) funds:


North Carolina’s General Assembly — under the leadership of Republicans for the first time in more than a century— will hopefully refrain in the future from pushing unfunded mandates onto the backs of counties and their taxpayers .... The GOP leadership in this state may preach fiscal prudence, but in this case they wasted local tax dollars .... Next time you hear state GOP leaders say they’re working hard to balance the budget, hold onto your wallet. That may just mean another unfunded mandate coming from Raleigh.