Buncombe GOP Gets Even Wiggier 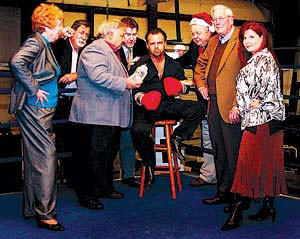 The Buncombe County GOP at its convention yesterday elected Chad Nesbitt as its new chair. Nesbitt is a well known conservative (we would write "conservative extremist," but why get redundant?) who started The Carolina Stompers to exterminate Democrats and "soft" Republicans willy nilly and who also happens to be the step-son of Democratic state Senator Martin Nesbitt, the Democratic Majority Leader of the NC upper house (Thanksgiving at the Nesbitt house must be tons of fun!). That's Chad, wearing the boxing gloves, in the center of the Carolina Stompers group photo (other members of this sterling group identified here).

Anyhoo ... those posting comments over at Scrutiny Hooligans about this rise of Chad Nesbitt are gleeful about the Buncombe Republicans' evident resolve to become even more marginalized, while The Bugg Blog runs through some of Chad Nesbitt's greatest moments. And you can see Chad himself in action, giving his nomination speech, on the Buncombe GOP site.
Posted by J.W. Williamson at 3/28/2010 12:00:00 PM
Email ThisBlogThis!Share to TwitterShare to FacebookShare to Pinterest
Labels: Buncombe County, Chad Nesbitt, Martin Nesbitt, Republican "brand"

That's Chad, wearing the boxing gloves, in the center of the Carolina Stompers group photo * JW

They look like great propects for the Jenny Craig Weigh loss program Or the new Sara Palin Sitcon Discovery cast.......

I checked out the link and posted a comment or two over at that site. I was surprised to see that the intolerance demonstrated by contributors to that site equaled the intolerance of Mr. Nesbitt, the target of their criticism.