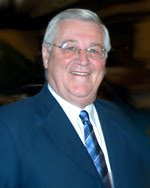 Jack Hawke, the infamous NC Republican operative, has bragged that he's the one who "recruited" Virginia Foxx to run for the NC Senate in 1994. He apparently has, in other words, a fatal attraction for the extreme and the unstable, because he also signed on for the Tim D'Annunzio primary campaign down in the NC-8. D'Annunzio went from zero to 60 on the nut-job scale in just under three seconds, being outed by Laura Leslie as the author of the I-heart-Armageddon blog and then holding a well publicized "machine-gun social" fundraiser.

Anyhoo, Hawke, by his own words, told D'Annunzio that his blog was a very bad idea. No candidate "should get up at 3 or 4 in the morning, sit down in front of a computer and pour your heart out. It's just not a smart thing to do." Like, never let the voters see your true self, eh, Mr. Hawke? Supposedly, D'Annunzio promised Hawke that he had sworn off blogging, but just couldn't quite do it. So Hawke has resigned from the D'Annunzio campaign, and in a very public way.

But, now, about this Jack-Hawke-recruited-the-Foxx-gnome factoid ... don't we need to chew on that for ... oh, spit that out! It tastes like gun metal and old hairnets.
Posted by J.W. Williamson at 3/10/2010 10:07:00 AM
Email ThisBlogThis!Share to TwitterShare to FacebookShare to Pinterest
Labels: Jack Hawke, Tim D'Annunzio, Virginia Foxx

Well! Every once in a while a GOP political consultant breaks out of the GOP mental institution and claims insanity as a defense!