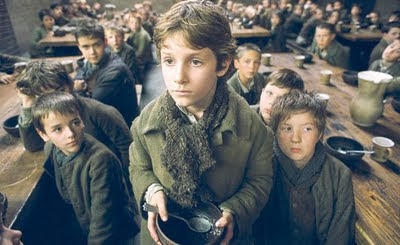 Mr. Bumble's philosophy in "Oliver Twist" is to keep the boys and girls in the workhouse hungry. He thinks they work more efficiently on empty stomachs.

Foxx's ideology has no heart, just as corporations have no birth certificate.
Posted by J.W. Williamson at 3/05/2010 09:55:00 AM
Email ThisBlogThis!Share to TwitterShare to FacebookShare to Pinterest
Labels: Virginia Foxx

Nothing surprises me with this crazy person. She needs to be put out to pasture!

Think of the characters, Ms Foxx, Senator Bunning, Dick Cheney, Rush, O'Reilly, and opportunist Palin.
Dickens couldn't have written such characters to show the greed of our time. History will not be kind to these people and their grandchildren will be ashamed to claim them.

Nice thoughts, Lib POV. But grandkids will first inherit millions of dollars. That might sway history to the kind scale, but just until the money runs out. Greed may be hereditary.

PS: How' "the right side/" I became so bored by those a-holes: n ot worth arguing. They will give you no points; they are always right and you are wrong. I got too angry dealing with the tea baggers who rewrote their own history. You still there/

It's a strange crowd over there, they have started censorship of the hard questions like what is the tea party plan to fix anything.

"...On a hunch, I decided to look up the word sociopath, which it turns out isn't defined much differently than psychopath. Here are some of the most common characteristics of both:

...
Lacks a sense of moral responsibility or moral conscienceShallow emotionsCallousness, lack of empathyLying without remorse, shame or guiltInterested only in their personal needs or desires, without concern for other people...http://www.alternet.org/news/145917/is_your_favorite_politician_a_sociopath

Foxx's ideology has no heart, just as corporations have no birth certificate* JW

What's next? Foxx entering a Puppy tossing contest or a Kitten Jugging Act?

It's a great article.  My only problem with it is the selective defining of the word "sociopath".  The extensive definition the author provides ignores the basic definition of the word, in order to fit the author's description of the politicians he discusses.

Lib POV: They don't get their disconnect. On one hand they will not allow one dollar of their money going to feed local HUNGRY impoverished children in school. In the next breath, they discuss their faith in Jesus. Didn't Jesus feed the poor? I thought I read that somewhere.

Are you still on that site giving them a hard time? If so, give them hell for me!

What would Jesus think of Mrs. Foxx? She needs to read Mathew 25:35.

I get depressed when I spend much time there.

Bridle: Thanks for making me USE my Bible. YES, THAT's what Jusus would say.
Mathew 25:41

Those people ( The Corporate Zombies ) already exsist over on Watauga Conservative.

another link for you libpov;