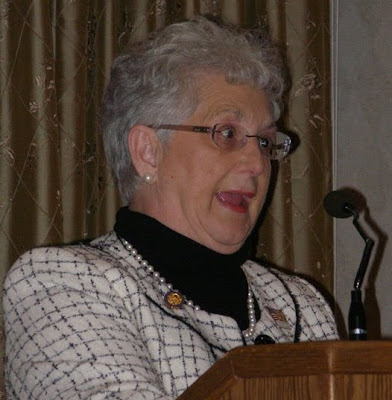 "I have deep concerns that some ... are dangerously fanning the flames...."
--Rep. Eric Cantor (R-Va.), speaking in Washington today, graciously blaming the victims, following a rash of threats of violence and vandalism by unhinged conservatives, tea-partiers, racists, and bigots

So ... who among us has fanned those flames?

"I believe we have more to fear from the potential of that [health reform] bill passing than we do from any terrorist right now in any country."
--Congresswoman Virginia Foxx, November 2, 2009, on the floor of the U.S. House

"All the promises [President Obama] has kept have endangered our lives."
--Congresswoman Virginia Foxx, on the Bill Lumaye Show, NewsRadio 680 WPTF, Jan. 5, 2010

"We're talking about four years. If we don't take this country back from the leftists who are running it now, we will lose our country."
--Congresswoman Virginia Foxx, to the Iredell County Republican Party's Reagan Day Dinner, Feb. 6, 2010
Posted by J.W. Williamson at 3/25/2010 05:44:00 PM
Email ThisBlogThis!Share to TwitterShare to FacebookShare to Pinterest
Labels: Eric Cantor, health care, Republican "brand", Virginia Foxx

In fact the Foxx is issuing challenges to members of the Communist Party to Duke it out in the town of Mayberry at the local Kroger's parking lot with Creampuffs at 10 feet of each other face. A Spokenperson for the local Communist Party said they would take up the Smackdown with Foxx, but she ate the Creampuffs at the Kroger Bakery Counter and than stuff the rest in her purse and refuse to pay for them...

Meanwhile while Rome burns and Madame Foxx becomes the last idiot standing in her own Ashes that she cause........

You are right on the mark, JW. Also Rush Limbaugh in urging people to "wipe them out".